With only two days remaining in the month of February, grain and soy markets are looking uninspired and mixed.  Fresh outside news appears to be nonexistent and I suspect that much of the trade amounts to little more than month end position squaring.   As it stands while I am writing the comments we have corn, wheat and bean oil and beans in the negative column with meal trying to maintain minor strength.  Macros should actually be just a touch supportive as we have energies and metals higher while equities and the dollar are soft.

While there was nothing released at the USDA conference last week that would fall under the category of shocking or even something worthy of a raised eyebrow but I do believe that it is worth noting that the economists for the agency appear to be on the same page as so many others in belief that commodities have reached a point of balance and the outlook for the 2017/18 crop year is neutral to positive.  The average price targets that they published project that the average price for corn will be $.10 (2.9%) higher than the current crop year, beans $.10 (1.1%) higher and wheat the biggest potential winner with a gain of $.45 (11.7%).  While certainly not the kind of gains that would be considered awe inspiring, after four years in a row of losses for corn/wheat and three out of four in beans, it is just the kind of stabilization that we need to see.  As the old Chinese proverb says, a journey of a thousand miles begins with one step.  Let’s keep in perspective as well that this number reflects an average year ahead and would assume no real weather issues.

Market bears have been more than happy to point out that when just looking at the raw figures, global stocks of grains and soy sit at record breaking level suggesting that even a crop issue here or there would not setoff any kind of sustained panic.  While you cannot completely argue with a that kind of logic, a more accurate picture is presented by looking at the global stocks to usage ratios and while still relatively high, by no means are they at records levels and production problems somewhere around the global could quickly move them back to uncomfortable ranges.  Take this one step further with the fact that over 40% of the global grain stocks and 22% of global bean stock are held by one country, China and as a general rule, these inventories are there for domestic consumption, not the export trade.  Just using corn as an example, the global stocks to usage ration stands at 21% with the Chinese inventory added in but if that is excluded, the figures drop down to a little over 10% and has remained relatively constant for the past 25-years.  Keep in mind as well that this was only achieved after four years in a row of solid production.  So, next time someone tells you about the overwhelming global grain inventories, take it with a grain of salt, no pun intended.  As I have commented previously, it would not require much of a production hiccup to send buyers scurrying after products. 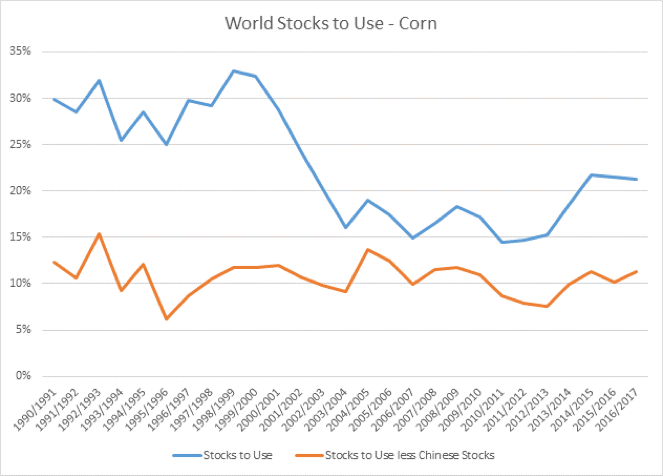