Grains finished lower across the board as profit taking from overbought positions seemed to be the theme. Traders will be looking to offset positions ahead of the three day weekend, and as noted in yesterday’s technical update, grains were quite overbought. 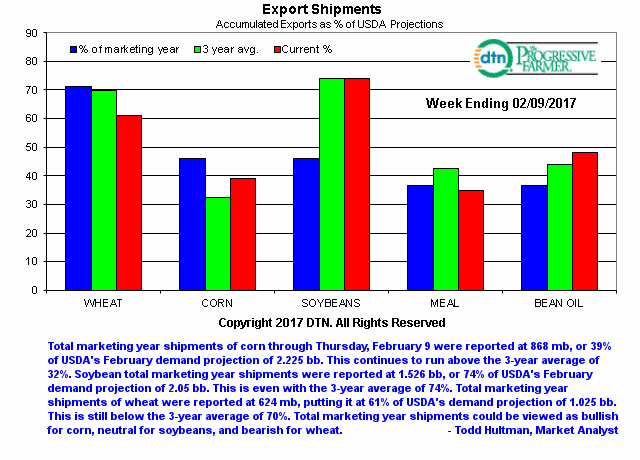 The USDA released their long term projections report today. These typically don’t mean much for the market, but I like to look at the language rather than the numbers for clues. It gives a good idea of what to be paying attention to throughout the year. If you’ve heard us at an outlook meeting this year you may recall how we’re very bullish long-term on soybeans due to the combination of economic and population growth in developing economies in Southeast Asia and India. The USDA included this bullet in the report today (full report: https://www.usda.gov/oce/commodity/projections/USDA_Agricultural_Projections_to_2026.pdf):

Population gains in developing countries along with economic growth and expansion of the middle class are particularly important for the projected growth in global food demand. Populations in developing countries, in contrast to those in more-developed countries, tend to be both younger and, with economic growth, experience more urbanization—factors that generally lead to the expansion and diversification of food consumption.

Another interesting quote from the report is from the International Policy section. The figures assume NAFTA will remain in effect through the projection period, which is a big assumption at this point. The concerning line was:

The projections also assume that Canada’s and Mexico’s domestic agricultural policies as of October 2016 remain in effect during that period. In actuality, fiscal constraints in Mexico have resulted in the amount budgeted for agricultural spending in 2017 being much smaller than the amount spent in 2016.

But perhaps the best line for producers had to do with prices. They said:

As adjustments to the resulting lower prices occur, the projections indicate that prices will stabilize and then rise moderately, reflecting long-term growth in global demand for agricultural products and continued biofuel feedstock demand. As a result, crop prices remain above pre-2007 levels.

I encourage you to read the report yourself to get a better handle on the economic themes we’ll be discussing as time goes on.

Turning to the charts….

March corn fell 5’2 to 373’4 while December lost 3’6 to 399’0. Yesterday I made my case for a bearish end to the week. If I use a four-hour chart instead of a daily I think it helps dial in on nearby support. We are actually at a level of moderate support right now and may see a temporary bounce higher overnight. Beyond this I think you can look for trade down to 363’0 on the March chart followed by a move into the high 350’0s. It’s too early to say if we’ll reach much beyond that, but we still have the potential to trade to the lower end of the old range. Stochastics are well overbought and volatility is low. This lends itself to buying puts or selling futures. In fact, buying 400’0 puts on new crop isn’t a terrible idea, and we’re behind the idea of making 10% sales at the elevator on it as well. 400’0 short dated May expiration puts settled at 13’2 this afternoon, which if purchased would put in a 386’6 floor until April 21st. 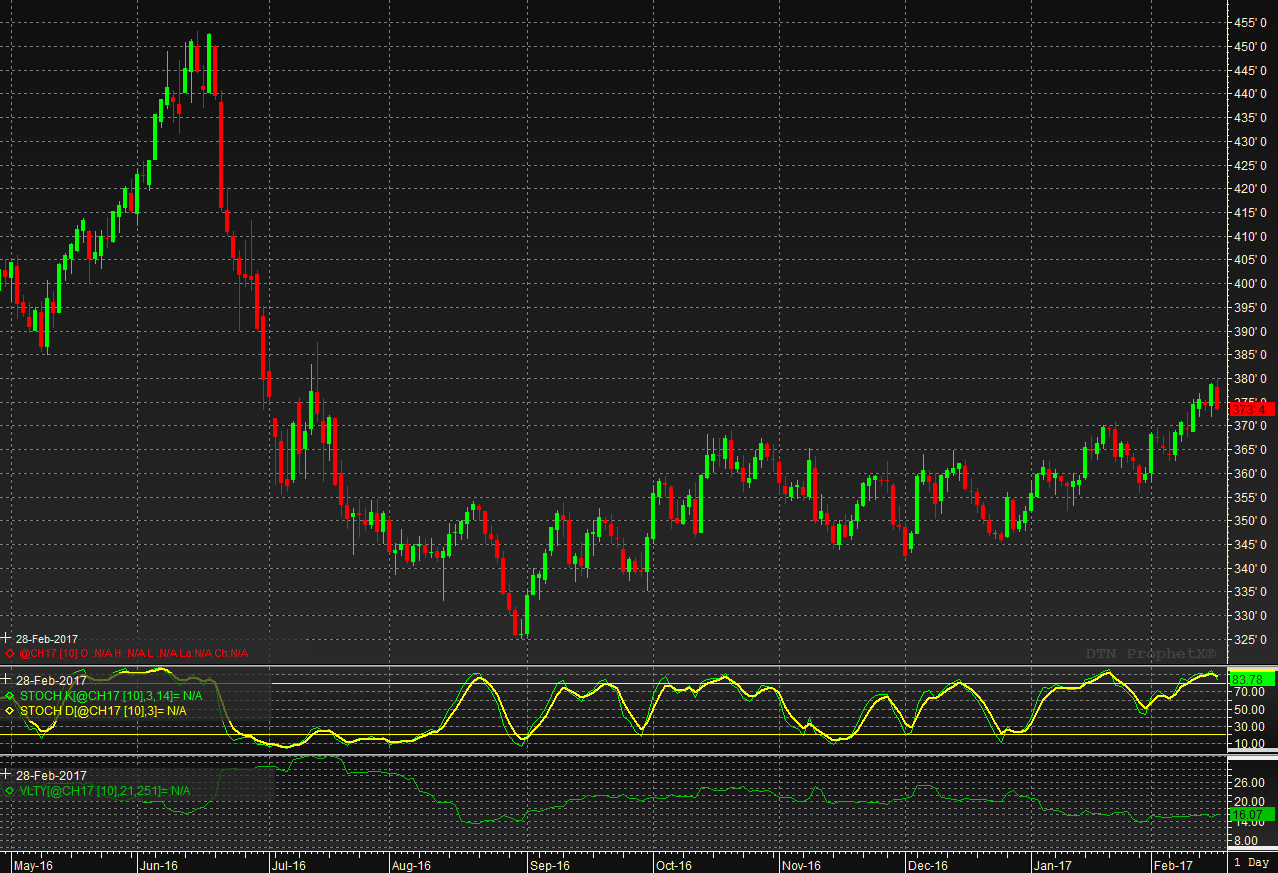 March soybean fell 17’4 to 1043’6. Stochastics have now crossed lower, but we traded almost entirely within yesterday’s range. This doesn’t merit a lot of excitement and I maintain my neutral to slightly bearish bias. We should see a lot of back and forth until we get more harvest data out of Brazil and acreage data domestically. With the rally in corn it would be reasonable to say traders should be less comfortable with the idea of a lot of acres switching over to beans. Nearby support is 1025’0 with resistance at 1070’0. 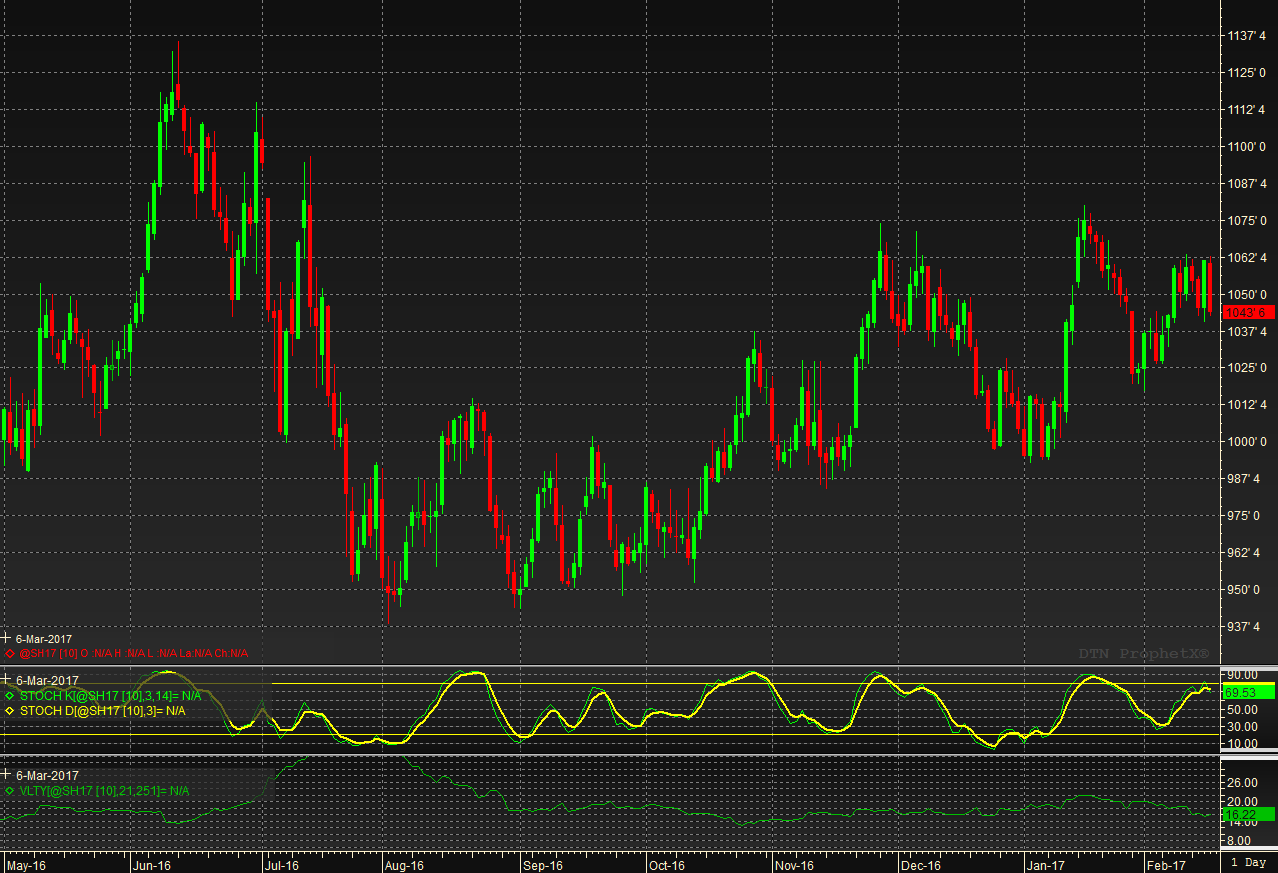 Wheat futures were lower across the board, but the biggest action was in Minneapolis wheat. The March spring wheat contract fell 17’2 to 550’2. That was the most bearish move across the commodity world today percentage-wise.