I am sure each of us has heard the use of the expression “Shock Therapy.” For many, it will undoubtedly conjure up imagines of Jack Nicholson in the movie One Flew Over the Cuckoo’s Nest, as they attempted to shock him into submission, but this term has also been applied to many other fields, including economics.  Of course, having grown up around livestock, my first experience with shock therapy involved my brothers and me sneaking up on each other with a cattle prod and applying a bit of unwelcome therapy.  It was certainly effective at getting the others attention, though, and, for anyone that has experienced such “stimulation” or witnessed the reaction of a young steer who has just felt that prod against its hindquarters, it is a pretty decent visualization of the response in the corn market yesterday after the USDA released the report.

For several months now, we have commented that the job of the market at this time is to encourage production and discourage demand, and at the time of the year, most of the emphasis is on the latter.  While indeed, markets have been extending higher, it has all been relatively orderly, and there seemed to be no urgency to discourage demand, at least until the last week or so, but even then, it was somewhat muted, particularly against a weakening dollar. That is until yesterday when the USDA provided the markets and corn in particular with their version of “shock therapy,” and it was quite effective at getting everyone’s attention.

Way back in 1980, The Alan Parsons Project released a song entitled “Games People Play” and the first line was, Where do we go from here now that all of the children are growin’ up, which of course is the question on many a mind in the commodity trade at this point. While I am certainly not qualified to provide any kind of definitive answer, it is probably a good idea to take a step back and look at the global picture as we know it today.

Looking first at corn, global ending stocks are projected to contract for the fourth year in a row, which of course is a trend that cannot continue indefinitely, and as I said previously, we appear to have reached a point where the market recognizes to only way to change that pattern is with higher prices.  All of that said, to try and keep this somewhat in perspective, at roughly 284 MMT, global ending stocks for corn sit at the fifth highest on record and the stocks-to-usage ratio at 24.6% is also the fifth highest.  As a comparison, back in the heady market days of 2011/2012, we had seen the ratio dip down to around 15% and remained there for several years.  Granted, markets are supposed to be forward looking and without knowledge of just how large the Chinese demand may be this coming year and how many acres can be enticed into corn production, bulls should be in control but that said, we are not in a “critical” situation, which in turn should keep a lid on values. If we encounter crop production problems this coming spring/summer, then we have a different story.

Looking at beans, while the domestic situation in beans looks quite tenuous, the global picture is not quite as worrisome.  Global ending stocks were projected to drop over 11 MMT this year to 84.31 MMT, marking the second year in a row of declines.  As with corn, this will still be the fifth largest ending inventory on record, but with demand growing steadily each year, the stocks to usage ratio has dipped down to uncomfortably low levels.  Assuming no further reduction in the South American output, or shifts in demand, the number is projected to slide down to 22.8%, which would be the lowest level printed since the 2013/14 crop year.   The lowest level reached in recent memory was 19.95% in the 2008/09 crop year. Accordingly, we have little wiggle room in beans, and you can bet that between now and spring, there is going to be a bidding battle for acres.

Finally, when we look over at wheat, it is quite understandable as to why this market has been a follower and not a leader.  Yes, global ending stocks were trimmed a bit from previous estimates yesterday, but at 313 MMT, they are still going to be a record.  The same situation exists with the stocks-to-usage ratio as it is projected to reach a record 41.2%.  It does seem that there are two conclusions that can be drawn from this; 1.) It would stand to reason that wheat will be finding its way into more livestock rations this year, and 2.) at least some of the spring intended acres will be diverted to corn or beans. 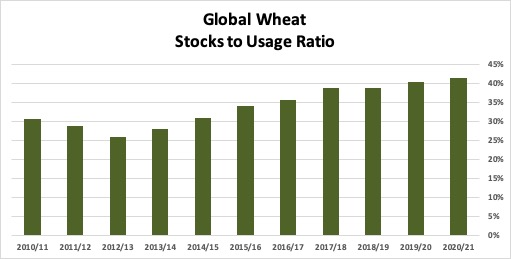 Of course, none of this exercise with balance sheets tells us how high prices could reach this year and it is always a bit of a “fool’s errand” to try and predict such, but we can at least point out some major retracements and other points to keep an eye out for.  As a producer, never lose sight of the fact that at end of the day, your job is to lock in a reasonable return on investment, and when you have reached that point, there is certainly no shame in taking it.  As the old adage goes, the greedy get needy, and that is really referring to a mindset more than anything.