The slow pace of harvest in Brazil appears to have finally caught the trade’s attention, as we have seen beans poke up and through overhead resistance that has been stopping nearby futures for the past few weeks. According to AgRural, the harvest is now 15% complete, which is still the slowest pace in the past ten years and stands at one-half of where they were a year ago.  Do keep in mind that albeit slow, the harvest is moving forward, and while this delayed the availability of beans moving into the global pipeline, over the next month or two, there will be 130+ MMT (4.78 billion bushels) of beans available from Brazil and well as another 61 MMT or so (2.24 billion bushels) from Argentina and other South American nations, ready for the taking.  To keep all of this in perspective, the U.S. produced 4.13 billion bushels last year. It is worth pointing out that even before the nearby futures began to pop this week, November futures had been pushing into higher highs and have now reached the highest level traded for a November contract since July of 2014.  Granted, bear spreads are generally not associated as price positive, but this is obviously reflective of the need to encourage as much acreage as possible this spring.  According to this chart, the next objective for the November 21 contract is right at the 13.00 mark. 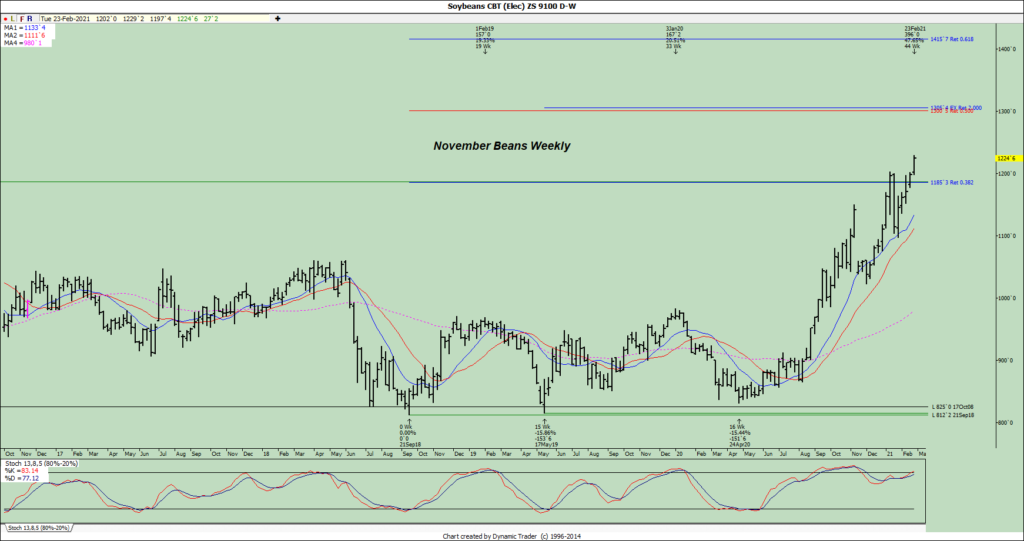 I did not intend to leave corn out of the picture, and of course, the delays in bean harvest in Brazil have in turn delayed the planting of the safrinha corn crop.  As of last weekend, it was estimated that planting was 20% complete compared with 40% last year.  Dr. Cordonnier pointed out that 60% or more of this crop will be planted after the ideal time window has closed, which could create both yield and quality issues.  That said, he is keeping his estimate for total corn production unchanged at 105 MMT.  In Argentina, 56% of the early planted corn is now in the filling stage and 57% of the late-planted corn is pollinating.  Dr. Cordonnier has kept his Argentina corn estimate at 45.5 MMT but the Rosario Grain Exchange is a bit more optimistic and is projecting a 48.5 MMT crop.

Seeing that we looked at the November bean contract, it seems only appropriate to peek at December corn as well, and as you can see, this contract has extended into higher highs as well this week.  We have just now pushed against the peak made in June of 2019 at 4.73 and if we can begin closing above this level, the door should open for a possible run into the 5.00/5.20 zone.  There would seem to be little question that beans, corn, and cotton will continue to wage battle each other for acres until we have a better handle on planting intentions this year. 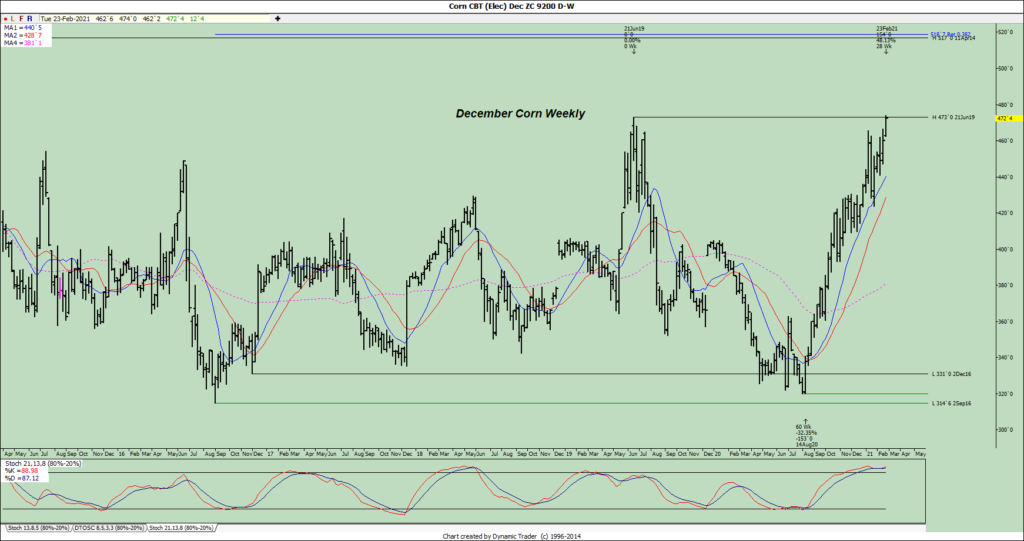