Whoever coined the phrase, “no news, is good news” evidently was not involved in commodity markets.  Granted, at times, that can be better than negative news, but in market situations such as we are confronted with right now, rehashing the same stories and weather forecasts day after day can soon make the trade anxious and prone to go off in search of greener pastures, no pun intended in light of the drought situation in many places this year.  We have next to nothing as far as market-inspiring news to look at this morning.  There have been a few showers pop up in the eastern Dakotas and into Minnesota, but with temperatures predicted to remain in the 90-to-100-degree range, that is like the proverbial fly peeing in the ocean.

In a real instance of no news is certainly NOT good news,  the Biden administration has kicked the can further down the road pertaining to biofuel blending requirements. While this has been an ongoing debate for some time, last year, any official changes were postponed due to the coronavirus, but the administration has remained mute so far this year as well.  The EPA is currently providing no comment as to any decisions, and the White House has stated that it is “not involved in the specific rule drafting process” at the EPA. Still, Ron Klain, who is Biden’s chief of staff, is participating in the discussions.  As you would expect, farm-state Senators are keeping the pressure on supporting blending regulations, and it certainly would not hurt for individuals at the farm level to be contract representatives.

China has released bean import data for the month of June and reflects a softening demand.  Imports from Brazil were still solid at 10.48 MMT, but this was down from last year when they brought in a record 10.51 MMT.  The slippage in beans from the United States was far more significant, going from 267,553 MT in June of 2020 to 54,806 MT this year.

We have very little news to digest in the macro markets this morning, either.  Equity traders had a change of heart yesterday, recovering all of Monday’s losses and, with the strength this morning, have now pushed higher for the week.  Bonds and notes have accordingly done just the opposite, and metals remain on the defensive.  Crude oil did break sharply lower on Monday, but after witnessing no panic selling yesterday, we have seen prices snap back again.  That said, indicators both daily and weekly have turned lower in this market. I suspect we have completed this now 13-month-old bull market. 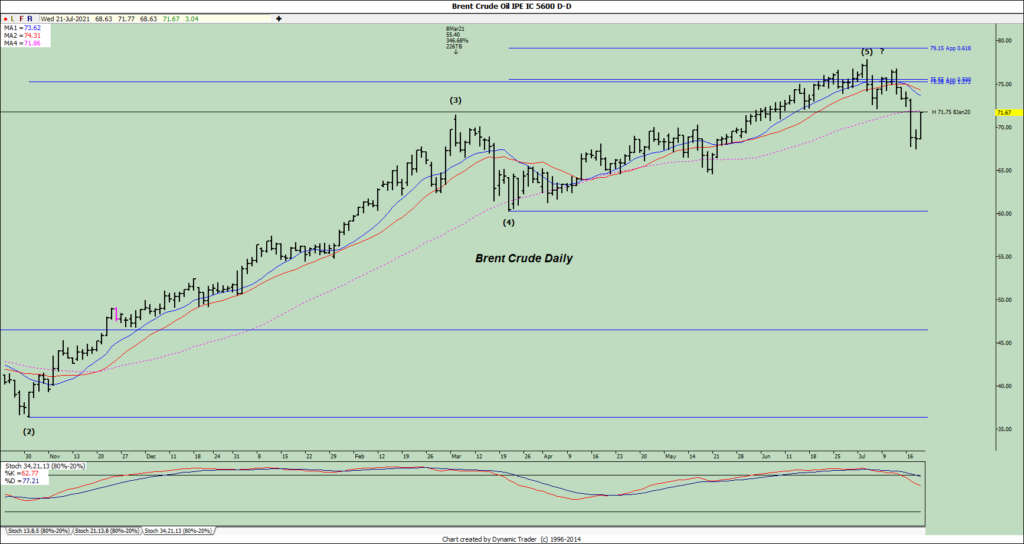