Ray Charles was known for having Georgia on his mind, but it would seem evident that the grain and soy trade have not only Georgia but every other producing state on their minds as we await the October production and supply/demand reports.  If the song Uncle Sam releases will be a happy or sad one depends largely on what side of the market you sit, and for now, we will have to remain patient until it is announced tomorrow.  Once again, here are the trade estimates; Domestic corn production is expected to come through at 14.973 billion bushels from an average yield of 176 bpa. 2022 carryout is pegged at 1.432 billion. In beans, the average estimate for production is 4.415 billion from a yield of 51.1 bpa. Carryout is projected to reach back to 300 million bushels. Wheat carryout is projected to come through at 576 million. Global ending stocks are expected to come through at 298.76 MMT of corn, 100.72 MMT beans, and 280.82 MMT wheat.

Granted, the hog futures contract on the Dalian Exchange only began trade at the first of this year, but it has witnessed some wild action in that short time span.  Just a few weeks ago, prices had pressed into record lows, which obviously Chinese hog have producers taken to heart.  Growing sick and tired of losing money, they have begun liquidating sows.  The Chinese government has taken note of what has been happening as well, and it was reported this morning that they stepped in and purchased 30,000 MT of pork for state reserves.  I suspect that after encouraging the industry to rebuild as rapidly as possible after ASF wiped out half of the nation’s herd, they do not want to see inventories go backward, particularly with food inflation already taking a bite from consumers.  The news has sent futures to the highest level in over a month this morning.  While I am unsure of just how widespread the sow liquidation was, so it is difficult to say if it will impact feed demand to any extent. Still, I would suspect that the overall situation here would not bode well for continuing pork export business into that nation. 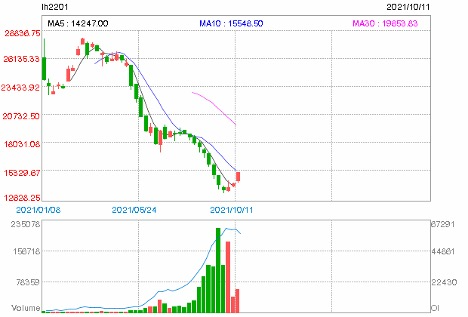 Turns out that is not the only ag issue China is currently confronting.  Heavy rains across northern reaches of the country have come just as farmers are preparing to harvest this year’s crop.  At this point, in addition to slowing down the pace, most of the concerns center on quality more than any quantity issues.

On the domestic weather front, a large portion of the Midwest did see some moisture over the weekend, hampering harvest activity, but of course welcome for the fall planted crops that are in the ground.  Intermittent wet weather appears to be in the forecast through Thursday, but things should dry out from there and temperatures are expected to remain above normal through the end of the month.

In the macro scene, we find metal steady/higher, financial instruments steady/lower, equities and the dollar higher, but the big mover and shaker is crude oil.  Spot futures have climbed into higher highs yet again and have moved to within striking distance of the October 2018 peak at 86.74.