While the USDA adjustments in wheat and, to a lesser extent, corn were relatively insignificant yesterday, the October report would appear to have driven the last nail into the 2020/21 bull market coffin for the grain and soy trade.  In fact, even the final bullish holdout for the year, oats, appear to have registered a blow-off peak this week.  Interestingly enough, other than the fact that the yield for oats was raised on this report, the balance sheet still resulted in a lower ending stocks figure, which would suggest that the sharp reversal lower yesterday would be a classic example of turning lower on positive news.  Keep in mind, this market has gained 172% over the past 62-weeks and pushed into a record high. 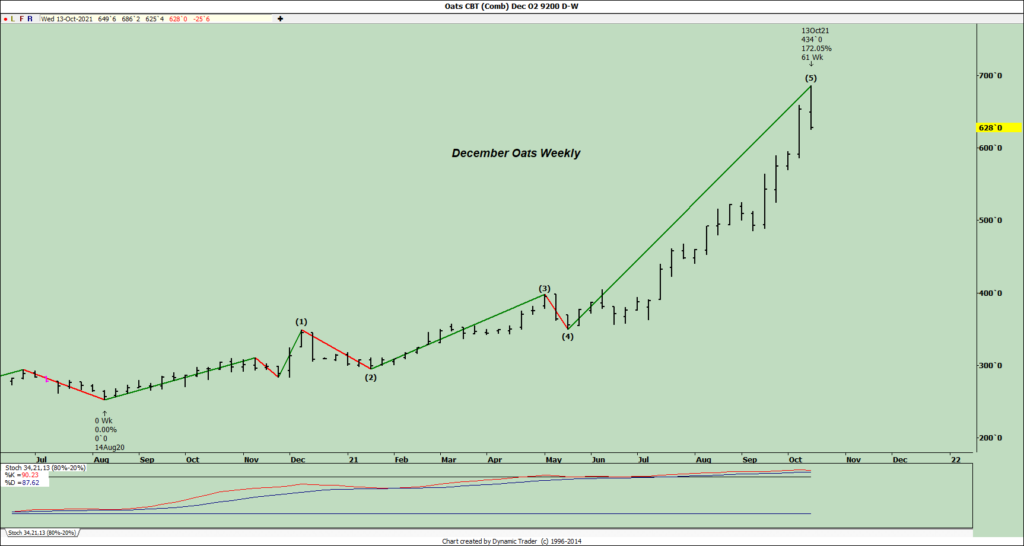 China released customs data this morning, and the numbers for soybean imports will not do much to lift the hopes of the beleaguered bean bulls.  They unloaded 6.88 MMT of beans during September, which is down from 9.49 MMT in August and 9.79 MMT during the same month last year.  For the calendar year to date, total imports of beans stood at 73.97 MMT, which is down .7% versus 2020.  Similar news in the meat trade as September meat imports were dropped 8% from August to 694,000 MT, and for the calendar year to date and now .4% below the same period in 2020.

The September CPI numbers have been released this morning and would appear to suggest that overall inflation may be leveling off but is not dead.  Month over month, we registered a .4% increase, compared with last month at .3%, and year over year, we are up 4%, which is the same as last month.  If we exclude food and energy, the month-over-month gain was +.2%, versus an expected .3% rise.  Energy prices were up 1.3% for the month, and food prices were up .9%.