After getting off to a bit of a rocky start, it would appear this will not have turned out as too bad of a week for the grain/soy market bulls.  If we were to wrap up trade right now, beans would still be in the negative column, down around 22-cents but on the rebound. Corn has now made it back to just 4-cents lower for the week, after trading down as much as 26-cents at midweek, and wheat is now a penny better for the week.  I should also point out that oats, which I commented on a few days ago, have also recovered sharply.  While we have not reached back to their highs, they are now up around 6-cents for the week and on track to record another record high weekly close.  While there is no question that several of these markets had reached into oversold positions this week and were due for a rebound, but the action is also a stark reminder that the overall commodity bull market of 2020/21 is not dead, as is visually apparent on this GSCI chart.  Undoubtedly, some commodities’ performance is directly related to supply-chain issues, which will be discussed a bit more in the weekly letter, but again reinforces the adage that a rising tide will still tend to lift all boats, of course, unless that have gaping holes in the hull. 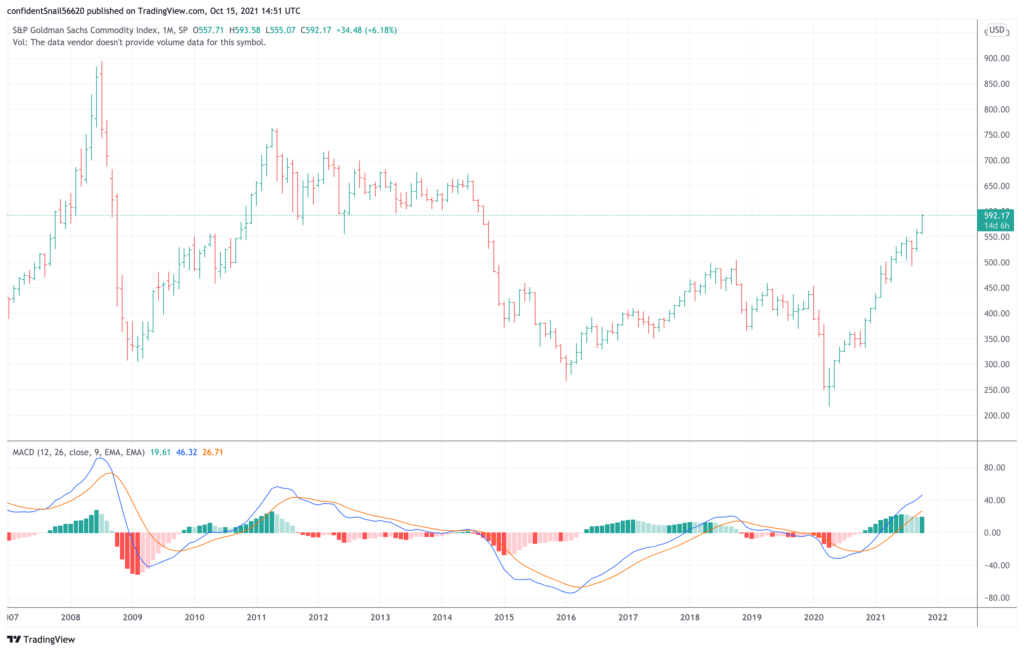 On the economic scene, Advance Retail Sales for September came in at +.7%, compared with an anticipated -.2%.  If Autos were excluded, the number improved to .8%.  Interestingly enough, these better numbers do not appear to be reflected in consumer attitudes.  For October, the University of Michigan Consumer Sentiment slipped again, coming in at 71.4, compared with 72.8 last month and an expected 73.

In the macros this morning, we find energies higher, gold under heavy pressure, financial instrument lower, the dollar flat to week, and equities following through higher after yesterday’s strong performance.  If we closed right now, the dollar would be down just 20 points for the week and the DJIA up 450 points, and the S&P 500 up more than 80.