With wheat leading the charge, grain and soy markets extended their mid-October advance yesterday and appear to be working on the same this morning.  While possibly a bit out of character for this time of year, being harvest and all, do keep in mind that the gains are not exactly awe-inspiring, with the exception of wheat.  We should not lose sight of the fact that the overall advance we have witnessed in the ag commodity world is now quite long in the tooth, and slowly, we are also losing the excitement of the narrative that pushed prices higher.  This is not to say that there will not be more surprises lurking ahead as we page forward, but no doubt some have already begun to lose interest and have moved on to other books.

There were obviously enough showers around last week to slow harvest activity a smidge (where were they in June/July). Regardless, corn moved ahead 11% and stood at 52% complete, 11% ahead of average as of the weekend.  With clear skies across much of the production region for the next week, progress should be significant.  Bean harvest also moved forward by 11%, reaching 60% complete as of Sunday.  This is 5% ahead of the 5-year average.  Cotton harvest moved up to 28% complete, versus the 34% average and winter wheat is now 70% planted, with 44% emerging.

Brazilian farmers have forged ahead as fast as they can, with an estimated 22% of the bean crop now planted.  This compares to just 8% a year ago and 16% on average.  In fact, this is the second-fastest pace set for as long as AgRural has kept records.  Just as important, unlike a year ago, this crop is being planted into good moisture as rains have continued to come, with more promised. Much has been made of the possible (dry) implications of La Nina on that region again this year, but never lose sight of the fact that correlations are not guarantees in weather or anything else for that matter.  First crop corn planting is now estimated to be 45% complete.  Weather conditions in Argentina do remain dry, but that has not stopped planting progress.  Beans are still at least a week away from commencing, but corn has moved to 23.2% complete.  This is virtually the same pace as a year ago but is 6% behind average.

Could it be that the bloom, or is that boom,  is now finally fading from the U.S. real estate flower, as well.  After recording the slowest prices increases this year in September, we find that both housing starts and building permits went backward during the month.  Housing starts were down 1.6% versus an expected .3% decline, and building permits dropped 7.7% compared with the anticipated 2.2% decline.

While they may not be building the next home, consumers are still actively spending money.  The Redbook Weekly Retails Sales for the first two weeks of October we 15.1% above the same period a year ago.  Granted, using 2020 as a benchmark may still be distorted, but there is no question that the American consumer is flush with cash and are not afraid to use it.

In the macros this morning, we find energies flat to lower, metals higher, financial instruments under decent pressure, equities higher, and the U.S. dollar under solid pressure. 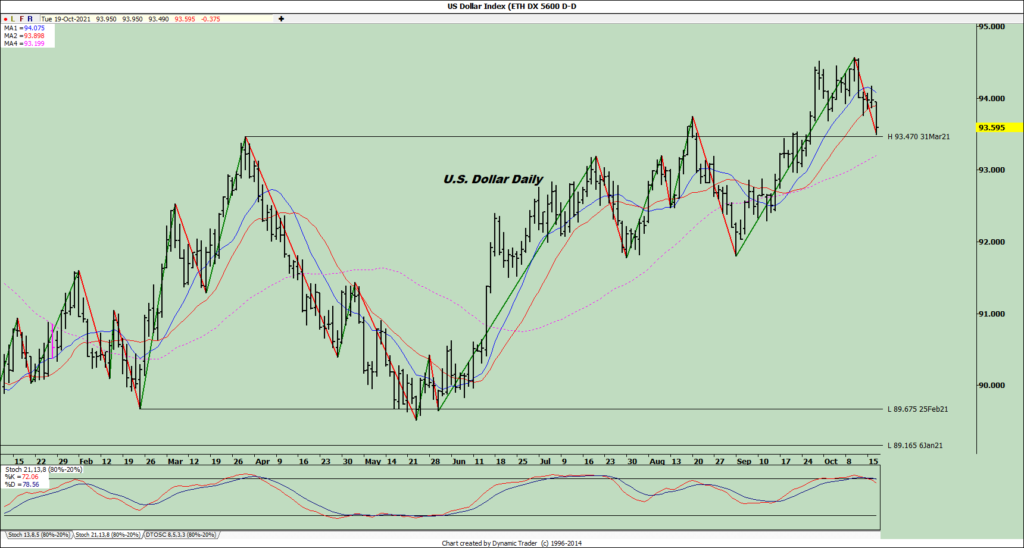