As a child, I enjoyed the Looney Tunes cartoons that were often shown on Saturday mornings, featuring the various characters of Bugs Bunny, Elmer Fud, and Wiley Coyote, just to name a few.  While I am not sure where it originated, it seemed that whenever one of the characters was drowning, be that in water or quicksand, they would hold up their fingers and count to three before finally submerging or being pulled to safety.  This image came to mind this week watching the action in the soybean market. After having dipped below the surface and bobbed around for at least the count of two, the benevolent Sam (Uncle, not Yosemite) came to the rescue and pulled the market out of the dark abyss before it was too late.  Of course, far be it from me to suggest there is a correlation between commodity trading and Looney Tunes. 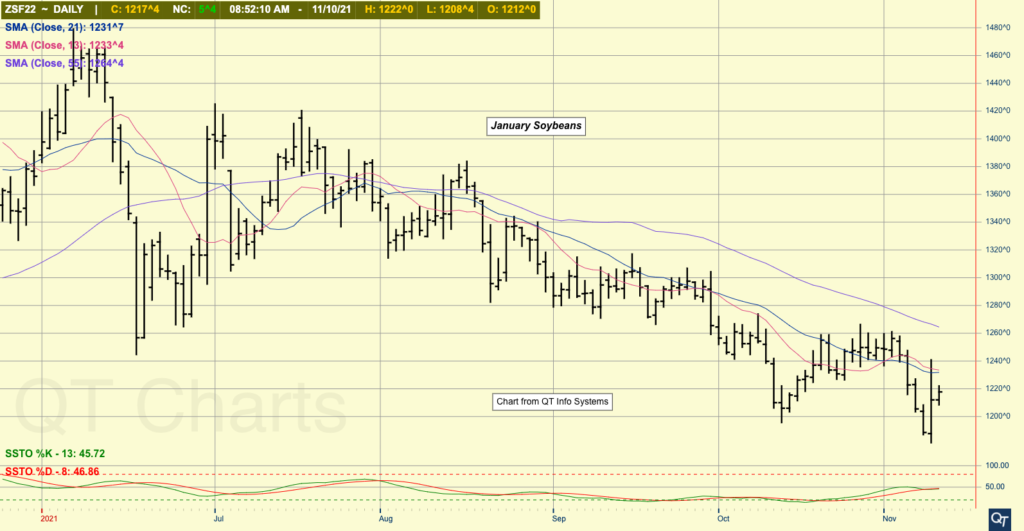 Let’s be realistic, though.  Yes, the bean yield/production numbers were lower than expected, and carryout did not grow as much as the trade anticipated, but nevertheless, grow it did.  At 340 million bushels, it was still 20 million higher than the October estimate and is 84 million above last year.  While we still have the risk of the entire South American growing season dead ahead, and China is not going away. Still, I would suggest that report will ultimately have done little more than to tell us we have reached a level of value for beans, so there is little reason for the bears to keep attacking, for now at least.  I believe, realistically, we can say the same thing for the entire grain/soy group and that the next couple of months of trade will be little more than chopping around within the parameters that we have developed over the past couple of months.  Welcome to the holiday season 2021.

CPI figures for October have been released this morning, and those who were hoping for a bit of moderation were sorely disappointed.  Year over year, the figure increased 6.2%, compared to an expectation of +5.9%.  Granted, this is still a comparison of the pandemic year, but even the month-over-month figures climbed more than expected.  The big culprit here appears to have been energy, which increased 4.8% compared with +1.3% last month.  Food prices remained the same at +.9%.  The overall CPI for the month rose .9%, which was the largest month-over-month gain since 2008.

In the macros this morning, we have energies under pressure, metals and Bitcoin strong, financial instruments under solid pressure, equities soft and the dollar sharply higher.