It seems that there has been a lot of attention directed towards the bean market this week, as with the help of Uncle Sam, we have seen this market pull itself up from the depths of despair and is now on track to close around 20-cents higher for the week.  Of course, when you think about it, 20-cents in beans is not all that impressive.  Regardless, it does appear to provide further technical confirmation that we most likely have an intermediate low in place for beans; we now just need some kind of reason to move higher.

While beans get all the attention, I would like to point out what has been going on in the meal, as it is the complex member that has witnessed the most positive action for the past several weeks.  Let’s do keep in mind that it has been the short leg of complex spreads for the better part of a half-year, losing nearly 30% over a 22-week time span.  That said, over the past four weeks, this market has advanced over 12% and is closing in on a 38% retracement at 354.80.  Weekly stochastics have turned higher in the process, which suggests we have an intermediate low established, but just how much more can we expect to the upside?  I would suggest not much.  Not only have we taken December futures back towards what previously was a key level of support (now resistance) at 350, we have weekly oscillators very overbought.  Even if correct, though, I suspect this will just develop into a board sideways pattern.  Granted, South American growing conditions will be the wild card for the next few months, but baring an issue there, I suspect meal and soybeans could be rather directionless through the balance of the year. 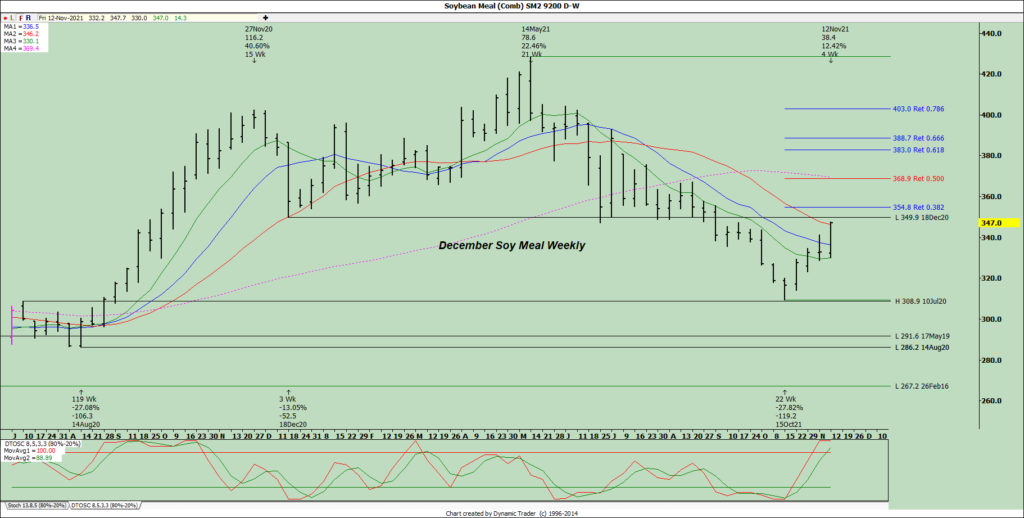 Weekly export sales were delayed until this morning due to the Veterans Day Holiday, but they are out this morning, and while lower than the previous week, were still not too bad for corn and beans.  For the week ending November 4th, we sold 1,067,300 MT or 42 million bushels of corn.  This was 13% below last week and 4% under the 4-week average.  Canada was the top purchaser with 357.6k MT, followed by Colombia for 304.6k and then Mexico dropping the number three spot with 272.2k.  Soybean sales dropped 31% from the previous week and were 25% under the 4-week average but remained above the million metric ton mark.  The net came through at 1,289,400 MT or 47.4 million bushels.  As you probably already expected, China was at the top of the list, purchasing 939.3k MT (73%), followed by Germany taking 311.4k and Portugal 82.1k. Wheat was much less impressive as sales slipped 29% to 285,900 MT or 10.5 million bushels.  The Philippines were at the top of the list with 152k MT, followed by Mexico buying 37.2k, and then Italy taking 29.2k.   In the meats, beef and pork switched places last week as we sold 20,600 MT of beef, which was 23% higher than the previous week, and 23,300 MT of pork which was down 49%.

According to the University of Michigan, consumers are continuing to become less optimistic each month.  The November Sentiment Index was released this morning and dropped to 66.8, versus 71.7 last month.  Wall Street was looking for a figure of 72.5.  The November Current Conditions number dropped to 73.2 from 77.7, and the November Expectations figures came in at 62.8, compared with 67.9 last month.  Small wonder as consumers continue to pay up at the gas stations and grocery stores and are bombarded each day with stories about supply chain issues.

In the macros this morning, we have equities higher but on track for the first lower close in the last six weeks.  Financial instruments are flat, metals higher, bitcoin under pressure, and energies lower.  Note that on Wednesday, Brent crude oil posted an outside reversal lower and continues to struggle.  We will need to slip down and begin closing below 80-cents to confirm a peak, but with indicators turned lower, that does not sound like an impossible task.  Keep in mind that market peaks often occur when everyone is bullish. 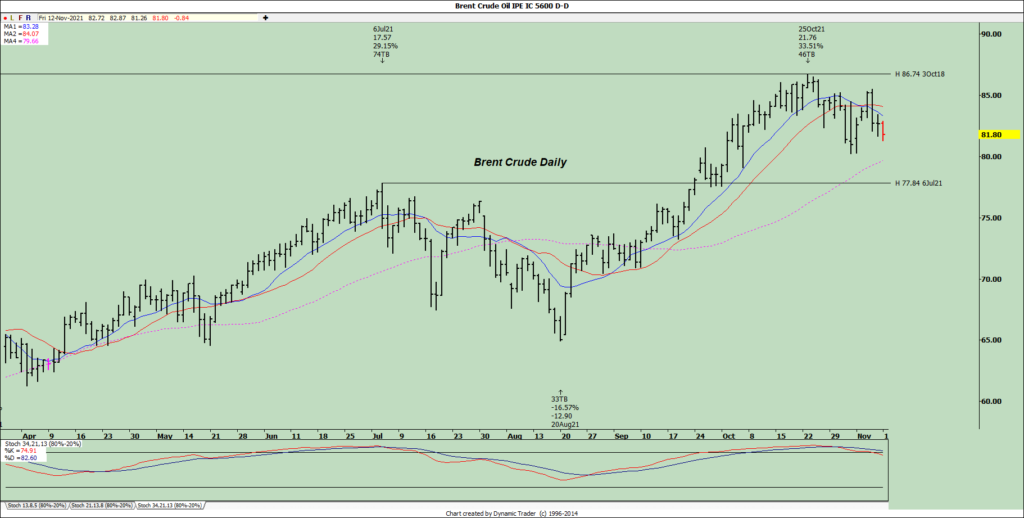