One more week like the last, and the 2021 corn and bean harvest will be pretty well under wraps.  Corn moved ahead 7% to reach 91% complete, and beans moved up 5% to 92%.  The eastern portions of the country could struggle a bit with the weather over the next week, but it should be clear sailing, or should I say, clear harvesting for those to the west.  Cotton harvest has now caught up to average, forging ahead 10% last week to 65% complete, and 94% of winter wheat has now been planted.  81% of this has emerged, and ratings increased a point to 46% good/excellent.

The NOPA soy crush numbers released yesterday were quite solid at 183.99 million bushels, coming in behind only last year’s record figure for October.  Oil stock grew to 1.835 million pounds from 1.684 million in September. A few more export sales were released this morning, but both fit into the routine category.  Mexico purchased another 270,000 MT of corn, and 161,000 MT of beans were sold to unknown destinations.  So, with all of the news leaning towards the supportive side today, why do most of these markets appear to have a case of the blues? Well, as I said, much of this seems to be pretty routine and considering we have been climbing as of late, not enough to energize fresh buying. In case you were wondering, it is 9-days until Thanksgiving and 39-days until Christmas.

Brazilian farmers are not exactly sitting on their hands either.  According to AgRural, in the past week, first crop corn planting moved ahead 10% to reach 85% complete, and bean picked up 11% to reach 78%.  Overall, weather conditions have remained favorable.  Things have not been so great for corn in Argentina, though.  Planting increased less than a percent last week and is just 29% complete, versus an average of 37.5% this time of year.  Better progress was made in soybeans.  Planting advanced nearly 12% and is now estimated to be 18.8% complete.  This is just 3% behind the average pace.

The much-anticipated Zoom tat-a-tat between President Biden and Xi Jinping appeared to go off without a hitch last night, and to the best of my knowledge, neither had to contend with that annoying circling motion you see on your screen when the connection is poor.  I am not sure why anyone would have expected a concrete measure to come from this meeting, but I have read that some business groups were disappointed there was no talk of reducing tariffs.  While that may sound a bit self-serving, do keep in mind that tariffs contribute to price inflation, and everyone is searching for ways to tame that beast.

Along that vein, the BLS released import and export prices data this morning.  During the month of October, Imports increased 1.2%, which is the largest monthly increase since the 1.3% rise in May.  As you might have already guessed, fuel prices led the advance by climbing 8.6% over September, which itself was up 3.9%.  Export prices increased 1.5% during the month, which was the largest jump since May of this year as well.  Prices rose 2.3% at that time.  Ag led the way last month with a 1% increase in value.

Looking at the macros this morning, we find energies and metals and Bitcoin all under pressure.  Financial instruments and equities are higher, and last but not least; the U.S. Dollar has extended into higher highs for the year, now reaching the highest point traded since July of last year. 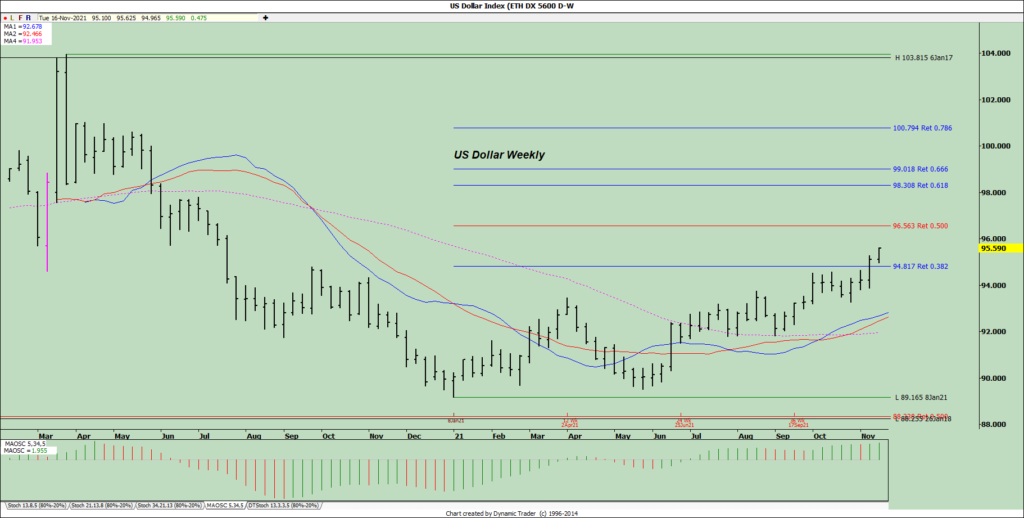