I suspect that many of you take little notice of it anymore (if ever), but by regulation, those of us on this side of the futures business are required to post risk disclaimers on everything we publish.  In a nutshell, it is supposed to forewarn readers that trading commodities is risky and not suitable for everyone. I am sure most of you have heard the old joke about the quickest way to make $1 million trading is to start with $2 million.  Har-har.  After forty-some years in the business, I have not come across anyone who was interested in commodities, decide not to trade after reading this statement, although I can recall some who should not, but without a doubt, it could help deter some who are being coaxed in by a firm or individual that was “ethically challenged” shall we say.  While I do not necessarily want to make the disclaimer any longer than it is, after seeing the action this morning, it struck me that maybe we should add in one more sentence of warning; Trading during holiday periods could be a quick way to separate people from their capital. It should be a well-known fact that volumes often become thin around holidays, particularly that period from late November through the end of the year, which can exaggerate moves. The thinner the market, the more extreme they can become.

I can still vividly recall the corn market back in 1980 when in thin volume, December futures gapped higher the Friday morning after Thanksgiving and posted the highest weekly close for that contract since 1974.  No doubt, bulls must have really thought they had, well, the bulls but the horns, but prices failed to move higher that next week and reversed sharply lower from there.  I should point out that we did stabilize from there and rebounded again in the spring, but that was the highest point that a December corn contract closed at until January 2007. By no means are I suggesting that is what we have going on right now, but rather, moves can become amplified during this time frame, and may not really reflect the underling fundamental picture.  In other words, be careful and tread lightly. 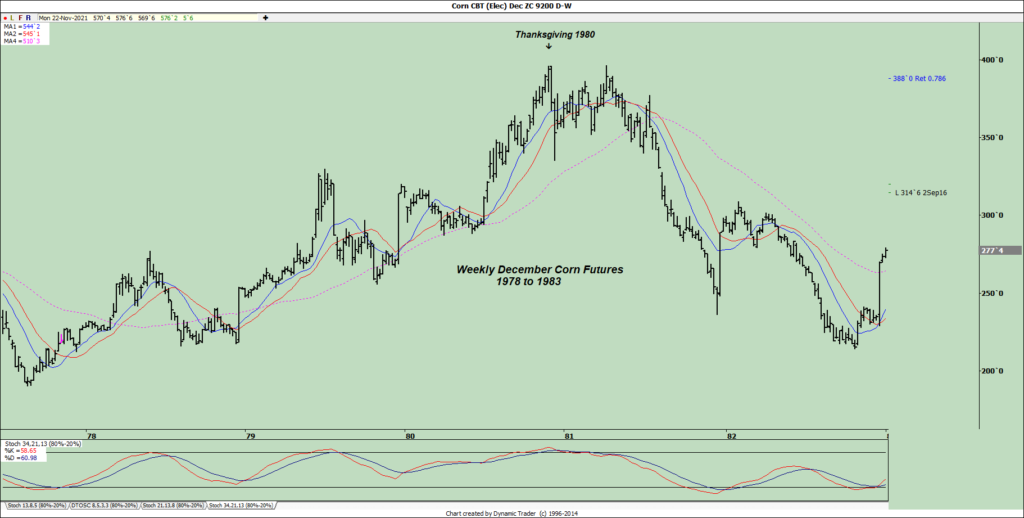 Ag-related news is generally sparse this morning.  China has released the bean import data for the month of October, which turned out to be the fewest beans they have unloaded since March of 2020.  Total shipments were 5.11 MMT, of which 3.3 million came from Brazil (-22%) and just 775,331 MT from the U.S. (-77%).

In Europe, France is finally nearing the completion of its corn harvest as AgriMer now estimates they are 91% complete.  The slower than usual pace has been attributed to wetter than normal crops that farmers tried to allow to dry in the field as well as better than average yields.  Planting of soft winter wheat has reached 93%, Durum 56%, and winter barley 97%.

In the macros this morning, we have energies flat, but metal and financial instruments are sharply lower.  Equities are strong, as is the dollar.  No doubt these markets have been influenced by President Biden’s announcement that he intends to nominate Jerome Powell for a second term as the Fed chair.