We have another relatively quiet news morning but at least prices have witnessed a little rebound.  It is difficult to believe it is much more that a Tuesday undo day and may be questionable as to if we can hold gains through the close as there appears to be little supportive at this time.  Regardless, we have at least moved far enough through the month of February that a little soft action right now should not have a huge drag on the average price for the month.  With just five more closes to add in, the average prices for December corn stands at 3.97 and November beans 10.21.  We shall see if the USDA provides us with anything to really chew on tomorrow morning.  Acreage projections should be released shortly after 7:00 central.

Since pushing north of the $50 level back in December, WTI crude oil has moved into a sideways pattern trading in a range roughly between $54 and $51. By no means have we done anything that would be deemed alarming for the bulls outside of sitting in a overbought position, but increased production and stocks in the US have appeared to temper upside enthusiasm.   Be that as it may, a report issued by Goldman Sachs suggests that the overall fundamental picture continues to remain positive.  Noting that production has rebounded in the U.S., that has not been the case globally as OPEC has evidently made good on its promise to trim and with Goldman’s projected 1.5 million barrels per day demand growth, world inventories should continue to be drawn lower.  They currently project that in the second quarter of this year, WTI values will work up to $57.50 ($53.75 current) and Brent values will rise to around $59 ($56 current) before settling back to $57 and $55 respectively.  Percentage wise, these are certainly not significantly higher projections but if correct, it does continue to forecast a positive direction for commodities in general. 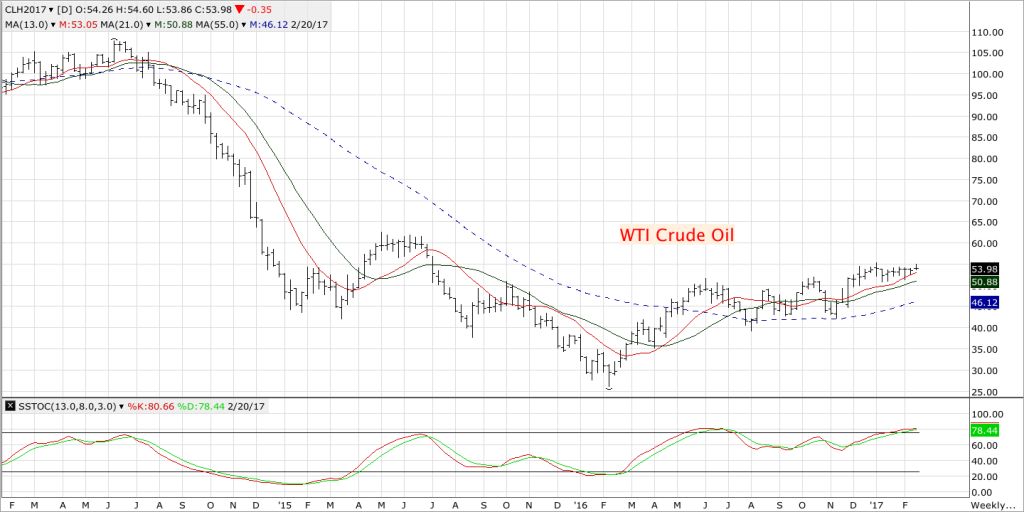 Finally, this morning we do find a little more export news showing up.  While not quite as robust as yesterday the USDA did announce additional sales of 136,000 MT of corn, this time to South Korea for the 2016/17 crop year.

I continue to believe that with the current news and lack of weather threat in South America, the grain and soy markets we remain adrift with a negative undertone.  This would not suggest a major wipeout to the downside but until we reach out to the time when Northern Hemisphere weather becomes a major talking point and concern, these markets should likely remain adrift.