While the tweaks that the USDA made in the December supply/demand report ranged from non-existent to insignificant, it was still enough to inspire additional liquidation in wheat and some renewed buying in beans. I struggle a bit to understand why an unchanged 340 million bushels carryout in beans would be construed as positive. That said, in light of the fact that beans have been on a six-month slide and have indicators turning positive, while wheat has just recently turned down from its high water mark and have indicators turning lower, it is not shocking to see the two move in opposite directions, particularly as we rapidly approach the end of the calendar year. It would appear that the relationship has reached the end of the line.

It appears that most of the ag-specific news floating around this morning is little more than a re-hash of the data released yesterday.  Things are still tense with Russia, and our relationship with China has not become any warmer this week, but as a whole, ag markets appear to have paid little attention.  If we wrapped things up right now, corn would have gained around 4-cents for the week, beans would be up 3-cents, and Chicago wheat would be 23-cents lower.

Inflation is the headline story on the economic front as CPI numbers for November were released.  We are up 6.8% year over year, compared with the October increase of 6.2%.  This is the highest number posted since March of 1982.  Of course, we were sloping lower at that point.  If we exclude food and energy, the figure was up 4.9% versus 4.6% the previous month.  The increase was .8% compared to .9% for the month-over-month figures in October.

Interestingly enough, according to the University of Michigan, consumer sentiment has improved slightly in early December.  Their Sentiment Index improved to 70.4 from 67.4, and the Current Conditions Index increased from 73.6 to 74.6 for December.  In the macro trade, we have energies, metals, and financial instruments higher.  The dollar is soft, Bitcoin a bit higher, and equities firm, with the S&P 500 poised to set another new record high weekly close. 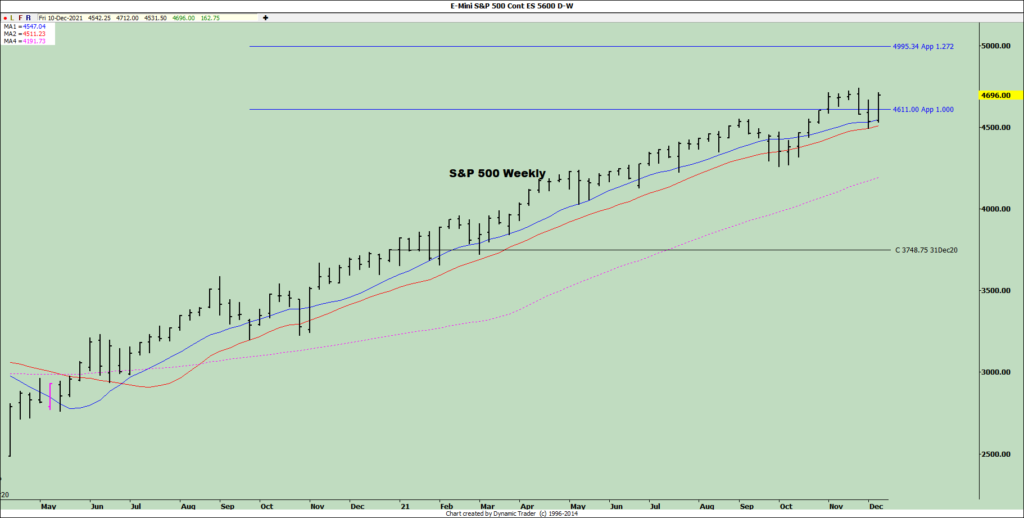