Grain and soy markets were able to pull off a mildly impressive recovery for the close yesterday, but little of that enthusiasm has been able to carry through into today’s session.  While there is always the possibility of something that could startle the trade, one must suspect that for this final day and a part of action for 2021, it will consist primarily of people squaring up the books for year-end.

Little has changed in the global weather forecast.  The driest areas of Brazil are still expected to receive moisture next week and beyond, and even Argentina could see an increase in moisture.  The upper Midwest appears to have its first real winter storm coming through to celebrate the first day of the New Year, and I can only imagine that farmers in California are breathing a huge sigh of relief.  Thus far in the past month, the Sierra Nevada range has seen near record-breaking snowfall of more than 202 inches.  The record for December is 238 inches which was set in 2017.

For the second week in a row, weekly export sales for soybeans were disappointing.  At first blush, one might chalk this up to the holidays, but keep in mind, the numbers released this morning were through the 23rd, so technically do not include any Christmas break.  Beans sit another marketing year low with sales of just 524,000 MT or 19.2 million bushels.  This was 35% below the prior week and 56% under the 4-week average.  China accounted for 83% of the net with purchases of 432.8k MT, followed by Turkey taking 119.5k and then the Netherlands in for 83.9k.  There were reductions of 494.5k MT from unknown destinations.  Corn sales, in turn, rebounded 27% from the previous week with a net of 1,246,500 MT or 49 million bushels.  Japan was the top purchaser with 385.8k MT, followed by Canada, taking 200.1k and then, unknown destinations at 163.8k.  I would also point out that soy meal sales set a marketing-year low, and soy oil sales were down 92% for the week and were 79% below the 4-week average.  Wheat sales went in the other direction though, with a net of just 199,500 MT or 7.3 million bushels.   This was 53% below the previous week and 43% under the 4-week average.   Taiwan was the best buyer with 110k MT, followed by Guatemala at 35.6k, and then Nicaragua taking 30k.  Meat sales were also a bust, with beef dropping 48% to 6,300 MT and pork down 89% to just 3,200 MT.

We have a slightly positive employment number to round out the year as the weekly initial jobless claims dropped 8,000 this week to 198,000. Economists had expected the numbers to remain unchanged, and this marks the third time we have dipped below the 200,000 level this year.

In the macro scene this morning, we find energies and metals a bit higher, Bitcoin steady to higher, financial instrument flat, and both the dollar and equities higher. The DJIA has now posted higher highs and higher lows for the past seven sessions and appears quite determined to finish out 2021 at record levels and on a positive note to boot. 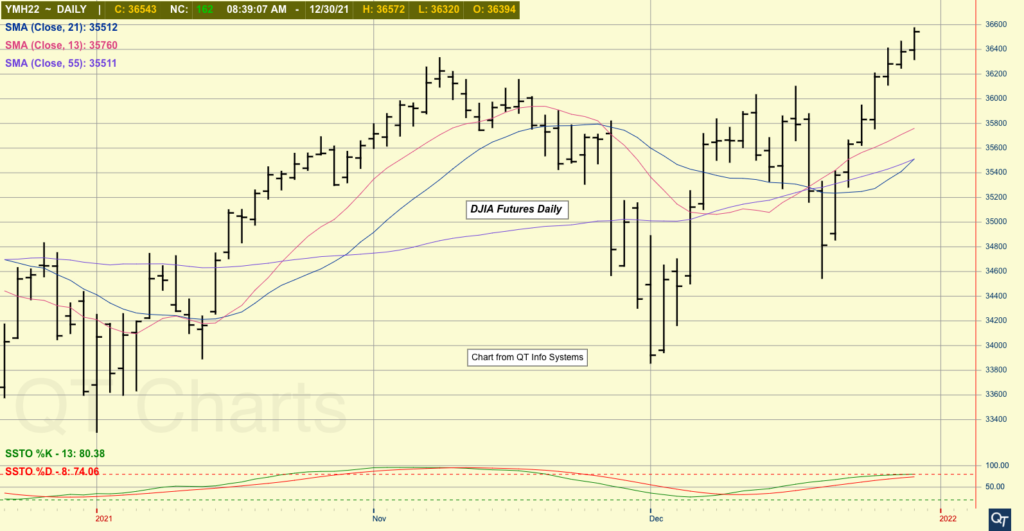