A week ago today, bulls in the grain and soy market really must have felt that they were back in the driver’s seat and set for their next road trip. It was the completion of the first week of a new year, and they had successfully pushed corn in beans into new highs for the post-harvest advance and even lifted the spirits of the battered wheat bulls. In fact, the close for the combined group had only been higher all the way back in May of last year. All they needed to begin the journey was to stop off the USDA filling station and top off the tank, and they were ready to go. Of course, as well now know, the fuel they were provided turned out to be a rather low octane, and in fact, the engine soon began to sputter, and they were forced back the garage for some needed repairs and a little rest. While I am not ready to say this group is so disheartened that they are prepared to scuttle the entire trip for the year, but until they can locate a better fuel, we could remain at an idle.

As I reported yesterday, for the first year of the Phase One trade agreement, China has fallen short by around 40% and this morning they released soybean import data for December as well as the entire calendar year.  In December, they imported 8.87 MMT, which was slightly higher than the previous month and 12% better than December 2020.  For the calendar year though, the total figure came through at 96.52 MMT, which was down 3.8% from the 100.3 MMT imported in 2020.  This was the first annual decline since 2018.  As we all know plans can go awry, but the Chinese government has also promised to encourage additional beans acreage this coming year in an effort to reduce the dependency on imports.

Do keep in mind that grain and soybean complex will be closed on Monday.

In the macro world, this morning we have equities under pressure, and as it stands right now, for the week the DJIA is down a little over 300 points, the S&P 500 is down 12 and the Nasdaq down a little more than 200 points.  The U.S. Dollar is firm this morning but is down nearly 100 points for the week and back to the lowest level traded since mid-November. Bitcoin is now $300 higher for the week, but that is a pittance of a move for that market.  10-year notes have recovered from early week pressure and could close higher for the first time in a month and 30-year bonds are also higher for the week.  Last but not least we have energies, and Brent Crude oil is poised to close higher for the fourth week in a row and has moved to within striking distance of the high posted back in October.  Note that one of the few things that helped keep inflation semi-in check last month was energies, which will undoubtedly, not be the case on the next report.  If we now push and begin closing above 86.75, the door opens for a run to at least 90.50 and possibly the 97/99 range. 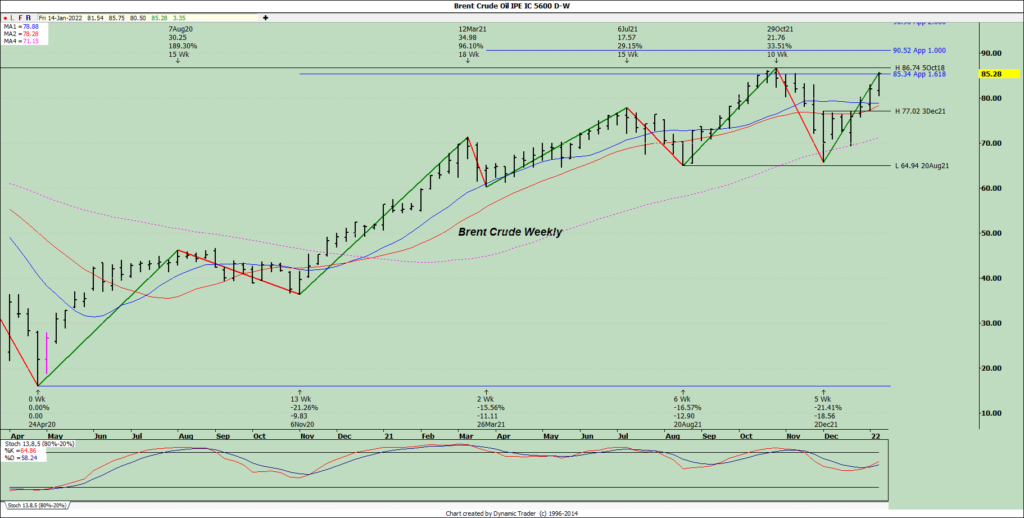