Soybeans were well supported by the dwindling crop estimates for Brazil yesterday, but the corn and wheat markets appear to be losing their luster. Prices have snapped back again this morning, and beans have continued their trek into higher ground, but I suspect the grain sector may be telling us the bull party may be in the waning hours. The next few days should tell the story.

As I commented yesterday, South American crops and particularly Brazilian beans, are a moving target right now, and everyone continues to shoot lower and lower.  Dr. Cordonnier sliced his estimate 4 million tonnes yesterday to 130 MMT and commented he has a neutral to lower bias for the weeks ahead.  Scorching temperatures in the Southern states have taken their toll, but the outlook moving forward appears to be improving.  Nationwide it is estimated that 10% of this year’s production has now been harvested, which compares with 2% a year ago.  First season corn is estimated to be 14% harvested.  He also lowered his Argentina beans production estimate 1 MMT this week, taking it to 42 MMT, and now expects total South American bean production to come in at 183.6 MMT, which compares with 198.8 last year.

The first month of 2022 has not been good for equity markets.  The S&P 500 lost 5.3% for the month, which is the largest monthly loss since March of 2020, the month the coronavirus initially hit home, and goes down (no pun intended) as the worst January since the great recession in 2009.  Does this mean that this nearly 13-year bull run is finally over?  It would be premature to come to that conclusion just yet.  My long-term cycles suggest the peak does not come until September. 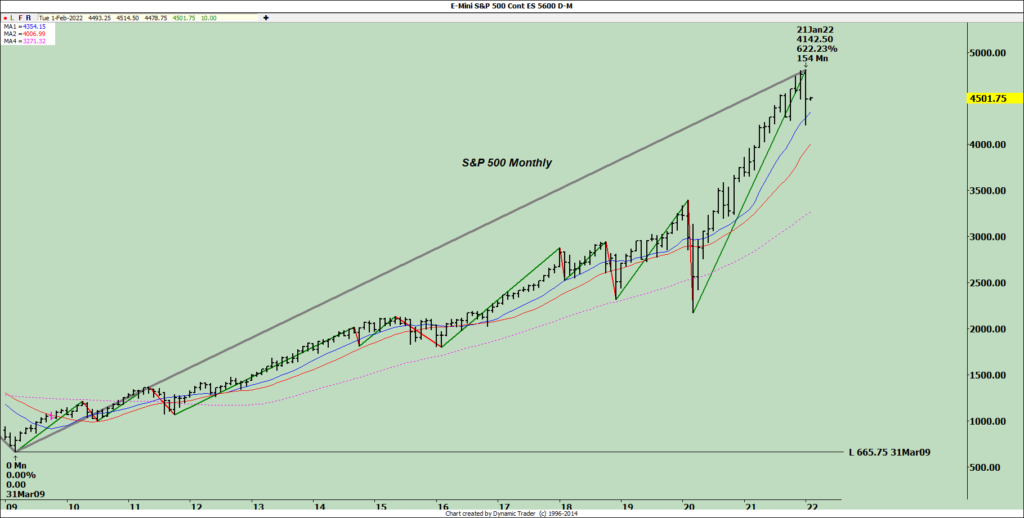