While I cannot imagine it is because they are excited that the Winter Olympics got underway over the weekend, but bulls are certainly revved up as we begin to trade in the grain and soy markets this week.  Gaps higher in corn, beans, and soymeal, with the latter two pushing into new highs for the swing.   Yes, South American weather concerns remain front and center, but the is really little else that would be considered fresh in the news that would explain this bought of new energy.  Could we be witnessing exhaustion gaps and a run for a peak?  The possibility exists, but we will need to remain patient for a day or so to either confirm or deny that. 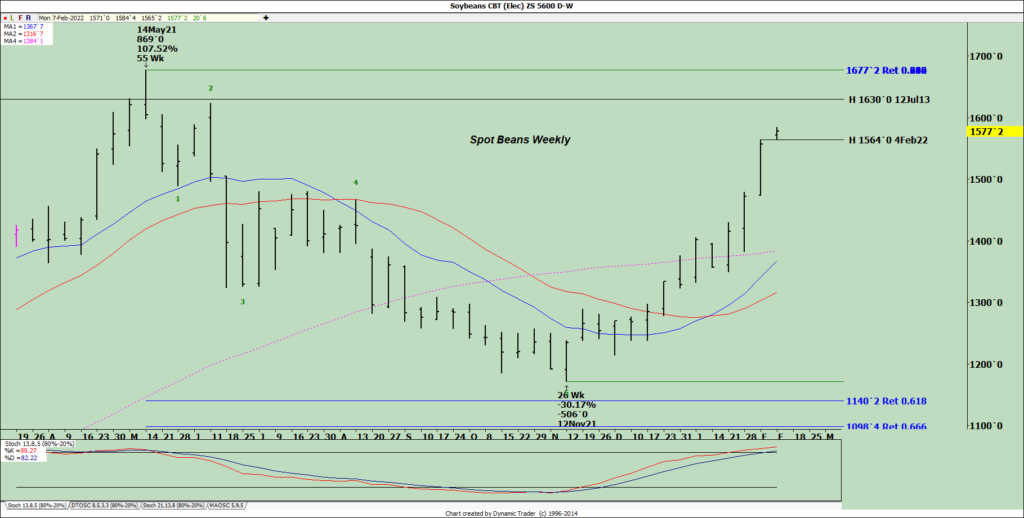 Those of you who watched the Olympic coverage over the weekend may have noticed that much was made of President Xi and President Putin’s meeting prior to the events.  It would seem that there was no doubt that this pow-pow was intended to send a message to the United States that they were are united in thumbing their noses at our opinion of world affairs.  While I would not go so far as suggesting they have developed some type of nefarious agreement to support each other’s plans to take over territory they consider rightfully theirs, i.e., Ukraine and Taiwan, they did obviously talk shop, and it was announced that China will now accept wheat and barley from all regions of Russia.  While this will probably have the most direct impact on Canada, the EU, and Australia, it could disrupt trade in other parts of the world as well.

Tomorrow, Washington is scheduled to release the tallies for Chinese imports of U.S. Ag products under the Phase 1 deal, and most expect that they will have fallen short of promised imports in the neighborhood of 30% to 40%.  Granted, there appeared to have been enough “language” within that document to allow the Chinese an out if the numbers were not met, which makes enforcement difficult, if not impossible.  The official comment from Beijing was that they have worked to implement Phase 1, “despite the impact of Covid-19, global recession and supply chain disruptions.” In other words, we tried out best, but…

We are not seeing much feature in the macro world this morning. Energies are mixed lower, metal higher, financial instruments are flat, Bitcoin is higher, the dollar is flat, and equities are mixed.