Outside of another 240,000 MT of beans purchased by China for the 2022/23 crop year, it is pretty challenging to uncover much else that would be considered fresh news in the ag domain this morning.  Of course, to help compensate for that, we have the anticipation of the February production and supply/demand reports to focus on.  I am always a bit cautious about suggesting that a specific report will turn out to be a non-event, as no sooner would I say that, and Uncle Sam would deliver a reach gut punch.  Still, oftentimes, we do not learn much new via these February figures.  With the uncertainty of South American production this year, there is potential for a surprise, but considering those crops are largely still in development stages and the fact that anyone and everyone has been slicing estimates, it is difficult to imagine a figure that would be shocking.  Possibly the most essential thing to keep in mind at this point is where we sit on the closing bell in relation to the figures will probably tell us more about these markets than the numbers themselves.

As we await these figures, we may as well revisit the broader commodity picture and see where we stand.  After taking a minor swoon during the last couple of months of 2021, bulls have returned to commodity markets again.  The GSCI has since extended to the highest levels traded since July of 2014 and has completed a 62% retracement of the entire range since the 2008 peak.  We should encounter tough resistance between 636 and 668, but other than the fact that we are sitting in a very overbought position, there is nothing in the action to confirm we have peaked just yet.  As a side note, after several years of underperformance, Goldman Sachs commodity group posted gains north of $2 billion in 2021 and, to the best of my knowledge, remains bullish here in 2022. 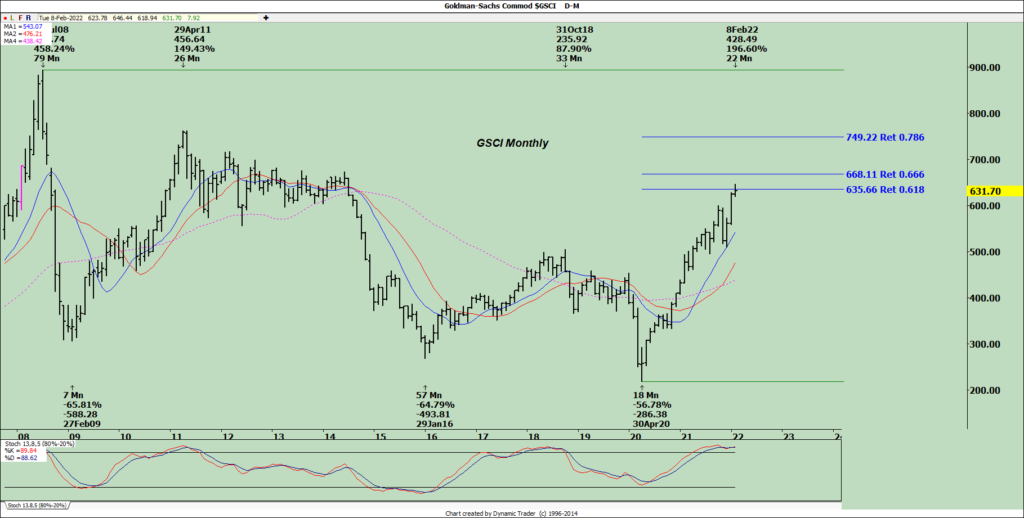 In the macro trade this morning, we find energies and metals firm, financial instruments higher, the dollar and Bitcoin soft, and equities are pushing higher.  Once again, it would appear that the “buy the break” crowd in equities are alive and well.