The latest reports from the Black Sea region suggest that tensions have eased a bit, which in turn have allowed grain and soy prices to ease as well.  Reportedly Russian has begun to pull some troops back from the Ukraine border.  While no one other than Vladimir Putin knows what Vladimir Putin will ultimately decide to do, this has at least allowed much of Europe and the United States to take a collective sigh.  In case you were curious, it was between the 20th and 22nd of February 2014 that Russian troops crossed the border to annex Crimea.  Annexation sounds so much nicer than an armed takeover.

Rainfall in Argentina and Southern Brazil will continue to be spotty at best for the next week to 10 days but is expected to become more favorable from then.  While that may not improve crop prospects significantly, it should at least bring a halt to the deterioration.  In his weekly update, Dr. Cordonnier slashed higher bean estimate 6 MMT to 124 MMT, which would sound more dramatic had Conab not dropped their estimate to 125.5 last week.  The USDA is at 134 MMT for now.  For now, he has kept the corn estimate at 112 MMT, which compares with Conab at 112.3 and Uncle Sam at 114.  This week, he also trimmed the Argentine bean estimate 2 million to 40 MMT and reduced the corn estimate 1 million to 50 MMT.  Last week the USDA published a number of 45 MMT for beans and 54 for corn.

A study published in the Proceedings of the National Academy of Sciences yesterday appears to have garnered quite a bit of attention.  Funded by the National Wildlife Federation and the U.S. Department of Energy, the paper proposes that ethanol is at least 24% more carbon-intensive than standard gasoline because of land and equipment use to raise and process corn into ethanol.  This, of course, contradicts research conducted by the USDA.  By no means is this the first nor will it be the last study published to try and discredit the manufacture of corn-based ethanol, and no doubt, as each is released, this industry loses a bit more clout in Washington.

PPI numbers for January were released this morning, and you would have never guessed, but they are higher.  The Final Demand figures came in at +1%, versus the expected .5% increase, and when food and energy were excluded, the number slipped to .9%, compared with an expected .4%.  Personal consumption for that month rose .8%.

The equity markets do not appear too phased by the news as we have turned sharply higher, but this after three days on a row of lower closes.  Financial instruments are under pressure again this morning, and interestingly enough, so are the dollar, metals, and energies.  Much of this may be a reaction to the easing of tensions in the Baltic region, but that does not mean we may not be close to exhausting some markets that have been on multi-year runs.  Of particular note is crude oil.  Brent futures reached a new swing high to begin this week and have since turned sharply lower.  It would be premature to suggest we have peaked, but we appear to have all the elements in place for that to be the case.  A close this coming Friday below 89.93 would provide the first confirmation. 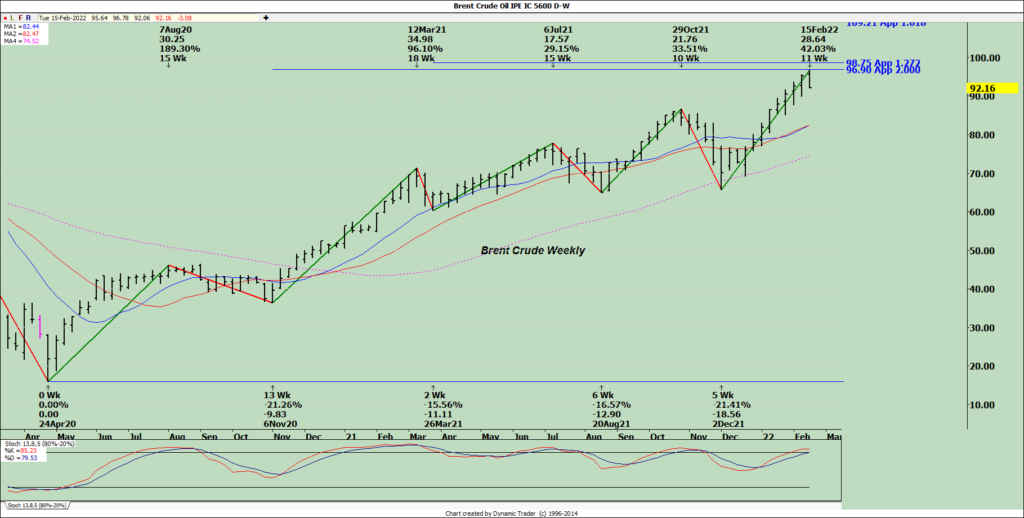