Needless to say, panic and pandemonium rule the day as Putin did indeed provide a shock to the global system with an attack from three different fronts on Ukraine.  Not quite sure how this will now be justified as a move to defend Russian sympathizers in breakaway fringes in that nation, but I really doubt he cares.  While trying to predict the movement of markets is always a challenge at best, but when confronted with a situation such as this invasion of Ukraine by Russia, it becomes even more akin to throwing darts at a target, but this time after being spun around a few times with a blindfold on.  No one has a great bearing on where that target may be.  As I commented yesterday, we need to keep in mind that what is happening there has not changed the overall global balance sheets.  Still, no doubt the level of uncertainty is even more significant, seeing that it involves a major player in the world grain trade.  The United States and allies appear to be busy developing additional financial punitive measures that will be implemented against Russia, which obviously, to this point, have had little impact.  I have read that many in the financial industry believe that Chinese banks stand ready to step in and provide interim support.  As they say, birds of a feather flock together.  One also has to imagine that the rulers in Beijing are taking detailed notes for the day they make a move on long-desired Taiwan.

The one predictable aspect this morning is the panic-type reactions in markets.  Grain and soybeans markets have pushed the limit higher.  Crude oil has moved to the $100 per barrel level for the first time since 2014, and Gold has spiked up to the highest levels traded since 2020 when the uncertainty of covid was still running rampant.  Equity markets have witnessed panic liquidation and have pushed to the lowest levels since spring last year, and concerns about interest rate hikes have taken a back seat to the desire for security and financial instruments have rallied sharply.  The dollar has spiked higher this morning and is challenging the highs of the year, so it is still regarded as a safe place to park money in times of uncertainty, but I cannot help but think in days gone by, it would not have rallied more than it has already.  In case you were curious, if this is a test for Bitcoin as to how well it will perform during an international crisis, I would have to give it a D minus at best. 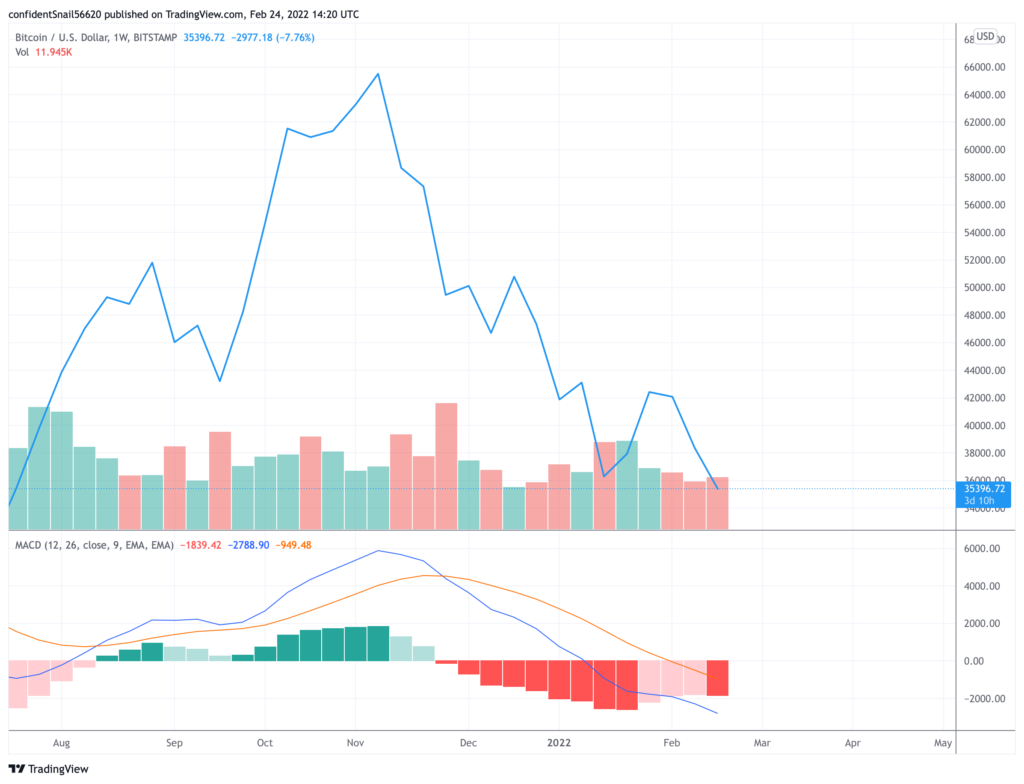 While it has been overshadowed by all the ruckus in Ukraine, the USDA did release the statistical estimates for this coming season.  They have placed corn acreage at 92 million, and with a trendline yield of 181 bpa, this equates to a crop of 15.24 billion bushels.  With a projected 75 million bushels cut in exports, the placed ending stocks at 1.965 billion bushels.  Needless to say, if this were realized, it would not be friendly to the corn market.  Soybean acreage came in at 88 million and using a yield of 51.5, production would potentially rise to 4.49 billion bushels.  In the case of beans, they have increased total usage by 143 million, of which 100 million was in exports, so ending stocks are projected to slip to 305 million.  Not as tight as 2020/21, but by no means bearish.  Total wheat acreage this year is projected to come in at 48 million, and if the yield of 49.1 bpa is realized, it would equate to a 1.94 billion bushel crop.  Estimated usage was bumped up 34 million, but even then, ending stocks would potentially rise 83 million to 731.  While certainly not burdensome, it would be an increase nevertheless.

Just how long the turmoil will carry on in Ukraine is, of course, an unknown, but as you might expect, markets will remain rather volatile until more is known.  I understand the ports in that nation have shut down for the time being.  There is one other thing to keep in mind.  As the old saying goes, the best cure for high prices is high prices, and I cannot imagine this runup grain and soy market will be doing anything to encourage demand, but it may be something we pay a different kind of price for down the road.