With the unprovoked invasion by Russia into Ukraine, there would seem to be little argument that we are watching an event unfold that has not been witnessed in at least eighty years.  There would also seem to be little doubt that this has quickly become a faceoff between open democracies and autocratic tyranny and appears to have done more to unite the former than any other event since the end of WWII.  Needless to say, it has sent shockwaves throughout all markets globally as they try and grabble and, in essence, place a value on uncertainty, which is a very imprecise and emotionally driven task.

As I sat down this morning to write commentary, I thought it appropriate to again look at long-term charts to try and gain some perspective of where we might be and noticed that on the spot monthly chart for wheat, we actually began the month of March with a gap higher, leaping not only above the February high but also above the 2012 peak at 9.47.  While one cannot say for certain if this may be a breakaway move or possibly an exhaustion gap, which will be filled relatively soon, I began to look backward to see if I could find similar instances.  It turns out; I had to look all the way back to July of 1973 to find one.  For any students of grain market history will recognize, that also happened to be a period when Russia shocked the world, or at least the grain world, as that is when they finally had to fess up to the fact that their collective farming system was a failure, and began to import wheat in a big way.  Negotiations for Russia to purchase U.S. wheat and corn were all very hush-hush and actually began in the summer of 1972.  Ultimately they were offered permission to buy as much as $750 million (big money at the time) of U.S. grain on credit over a three-year period.  During the ensuing months, they quietly began snapping up grains from around the world, and while markets rose according, it was in July of 1973 that the wheat really hit the fan, so to speak, as they purchased around 10 million tons of U.S. wheat and corn that month.  Many refer to that period as the Great Russian Grain Robbery, as they had for some time been effectively able to keep the problems they had at home under wraps and were able to secure subsidized bushels from the U.S. and others. 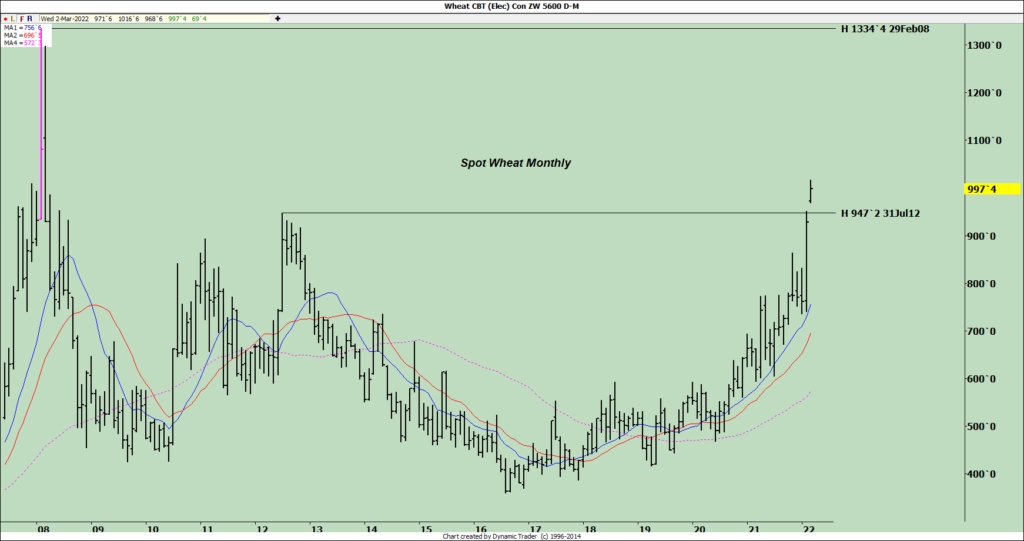 One of the outcomes from this was an awakening by the USDA and others that we needed a better source of intelligence for world grain production, particularly in closed countries such as Russia, to try and avoid or at least temper market shocks.  In many respects, it heralded in the advent of satellite technology being used to monitor crop conditions and output around the world.  Granted, we have by no means perfected this technology but have advanced light years inaccuracy since 1972/73.

Today, we continue to watch history unfold in front of our very eyes, and at least for those sitting in democratic nations, it would appear that Russia is trying to pull off another robbery, this time involving people and territory instead of grain.  It would be premature to draw conclusions as to what lessons we may learn this time.  Still, one would hope that it will at least be a recognition of the dangers of an authoritarian rule, that always have and will always remain, and to think they play by the same rules as those in democratically elected government with a free press, is naïve at best and deadly at worst.