It would seem that we have begun this new trading week nearly devoid of fresh news to focus on in the ag world.  The reports from last week appear to have a lingering minor ill effect and for now it would seem there is little else to digest until we have reached out to the end of the month where we will uncover the trifecta of the quarterly hog pigs, quarterly grain stocks and of course prospective planting reports.

While the temporary at least, return of winter has further pushed back ideas of an early spring in the United States, South America continues to forge ahead and crop estimates for Brazil continue to expand.  Late last week AgRural reported that bean harvest in that nation had reached 56% complete which would be 4% ahead of last year and 9% ahead of the average pace.  This is allowing the planting of safrinha crop corn to advance rapidly as well and they project that 88% of this acreage has already been planted compared with an average pace of 83%.  Not that you need to be reminded but last week the USDA pushed the Brazilian bean estimate up to a bin busting 108 MMT, up 2 MMT from the previous estimate and pushed the corn estimate up a full 5 MMT to 91.5.  Conab now projects a bean crop of 107.6 MMT and corn at 88.9.  Difficult to uncover a silver lining for the currently price outlook in those dark clouds.

The attention of many traders this week will shift back to Washington but not in anticipation of the latest battle between republicans and democrats but rather to see if the Fed will make good on its promise for additional interest rate hikes.  The FOMC is scheduled to meet on Tuesday and Wednesday and markets appear to be banking (no pun intended) on a 25-basis point hike and after the solid jobs numbers that was released last week, the odds would seem pretty solid that this will be the case.  It is interesting to note that just three weeks ago 10-year notes were pushing against upside breakout levels but have since returned to the lowest point (highest rates) since the December lows.  It is interesting to note as well that the dollar is not really reacting in a fashion that you might expect as after failing to maintain strength last week, we have extended a bit lower now to begin this new week. Failure to respond to what theoretically should be positive news could be a signal that we are looking at a very top-heavy market.  Maybe there could be a little light behind those dark clouds for commodity markets after all. 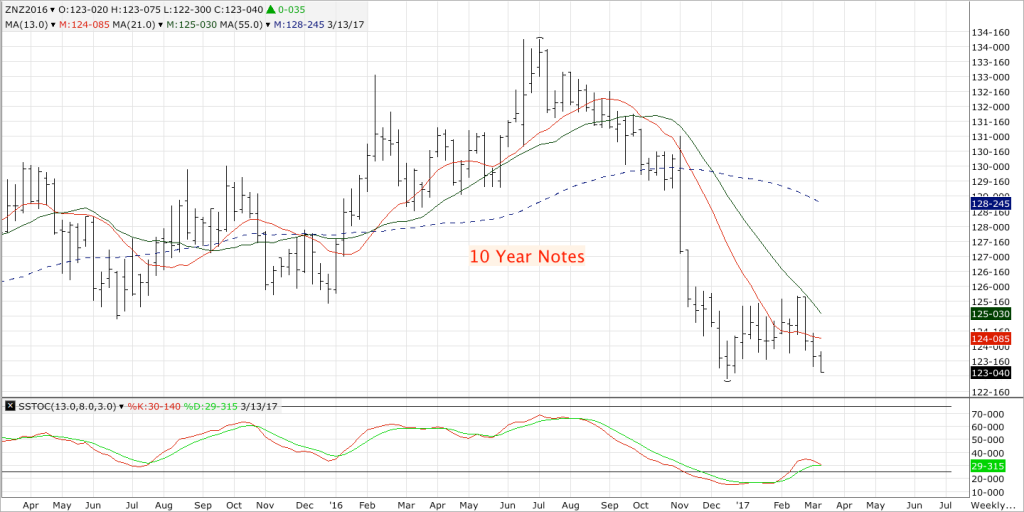