March has turned out to be a rather discouraging month thus far for bulls in the grain and soy markets and with pressure once again overnight, it would not appear that we are not finished with the shellacking of the bull just yet.  Actually, this extends well beyond these two complexes as commodities in general are on track to suffer one of the roughest months and possibly roughest quarters in the past year.  If we were to close right now, the GSCI would be at the lowest levels since Thanksgiving of this past year.  Realistically this should not come as a major surprise as after generally rising prices in the commodity sector through much of 2016, a number of markets were left in an overbought position and without a consistent supply of fresh bullish fodder, we were susceptible to witnessing a downward correction, which now appears to have turned into a reality.  If you recall, not long ago I was expressing concern that too many were already jumping on the commodity band wagon and we could be at risk of needing to shake out a few of the weak climbers from the trees.  While focusing primarily on crude oil and industrial metals, even analysts from Goldman Sachs took to the airwaves yesterday to defend their longer-term bullish stance on the commodity sector stating, “all these concerns are misplaced and argue that the market needs a little patience to wait for the fundamentals to materialize.” The concern that he was referring to was primarily focused on a possible slowdown in Chinese economic expansion.  The Goldman representative was not alone in this outlook as yesterday Barclays also recommitted to its bullish outlook on crude oil for the next several years.  As I have commented previously as well, one should keep in mind that investment banks such as these are not generally focused on the short-term performance in a market and attempt to position their clientele for the major swings but for the near-term at least it would seem obvious that we are lacking a fresh bullish story. 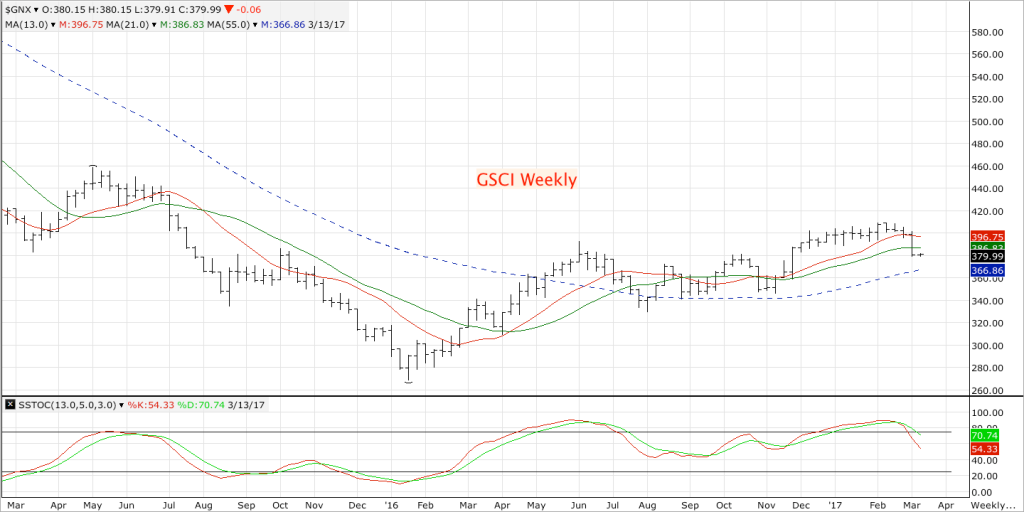 While it would be premature to suggest this will be the story, note that Australian meteorologists are raising the El Nino warning flags once again.  The Bureau of Meteorology for that nation now states that there is a 50% change of an El Nino occurring this year as six of the eight thresholds in their weather models could be triggered by this summer.  Were this to be correct, it could suggest a tough season ahead for African and south east Asian crops.

For now though we must confront what appears to be a tremendous crop coming home in South America, an energy market that has lost its mojo and a US Dollar that continues to hold at the highest levels in the past fourteen years. For now these appear to be creating enough headwinds to not only stop our markets in their tracks but push them a bit backwards. I suspect that until we can move out closer to the time we can actually generate a few weather concerns at home, grain and soy markets will have a difficult time sustaining strength.