For three days this week, the movers and shakers in the commodity world are gathered in Lausanne, Switzerland for the annual Financial Times Commodities Global Summit (note that I remain here in Northern Illinois). The program of events includes presentations and discussions covering every aspect of global commodity trade and in light of the current populist/protectionist rhetoric that is being heard from many corners, as you might imagine it has been a major topic of discussion as well.  Previously today (afternoon in Switzerland) the key session was titled; Leaders’ Debate: Agriculture, and the panel included to name just a few Carl Casale, CEO of CHS, Chris Mahoney, CEO of Glencore and Gonzalo Ramirez Martiarena, CEO of Louis Dreyfus and featured a presentation by David MacLennan, Chairman and chief executive of Cargill.  Mr. MacLennan stated that the risks of a trade conflict with China has gone up in the current climate and that the economic nationalism that appears to be on the rise around the globe produces a “jaundiced viewpoint.”  Those sentiments were echoed by others and Mr. Casale of CHS stated that in the ag export sector, there was “not a lot of resilience within the system to absorb trade disruptions.”  Granted, at this juncture protectionist rhetoric has been little more than talk, possibly with the exception of nixing the TPP deal that had never been enacted, but many fear where there is smoke, there will be fire, particularly concerning NAFTA when it comes to US agriculture.  Mr. MacLennan did make a solid point in that any “agreement that is 24 years old (NAFTA) deserves to be looked at and refined, but not thrown away.”  It would appear that within the next few days, we will finally have a new Secretary of Agriculture in the country and while it is a bit disconcerting that it has taken this long, from what I can gather it sounds as if Mr. Purdue will be a strong and much needed voice for US agriculture in the new administration.  That said, now is not the time for the ag community to sit back and assume that the bluster of rhetoric will not turn into action nor to believe that we can rely on others to be our voice.  Support the organizations that are fighting for ag in our capitals and as I have suggested previously keep the contact information for your representative and senators close at hand. (Chart and graphics courtesy of Financial Times) 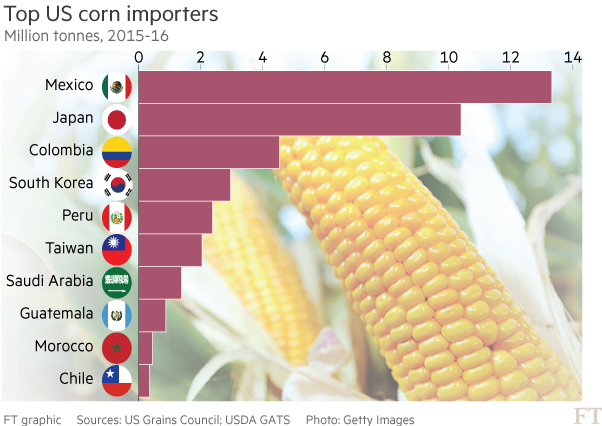 We still have a couple days before the USDA releases the Prospective Planting and Quarterly Grain Stocks reports but let’s not forget that the quarterly Hogs and Pigs estimate will be released tomorrow.  The current trade estimates break down as follows; All hogs and pigs 104%, kept for breeding 101.8%, kept for marketing 104.2%. Dec-Feb farrowing intentions 101.4%, March-May at 101% and the pigs per litter at 102%.