After rising for the first two months of 2017 and ten out of the past twelve months, global food prices slipped 2.8% during March, nearly erasing all the gains posted this year. Overall though, we remain 13% higher than we were a year ago and 14.5% above the extreme lows posted back in January of last year.  The largest impact on the index came from declining sugar and vegetable oil markets with the meat price index the only category posting a gain.  The FAO did note that global cereal production is forecast to drop slightly this coming year, (-2.7%) primarily due to the reduced wheat production in Australia, Canada and the United States.  Recognize the expectations for a lower output is tried to reduced acreage, not because of any anticipated weather issues. 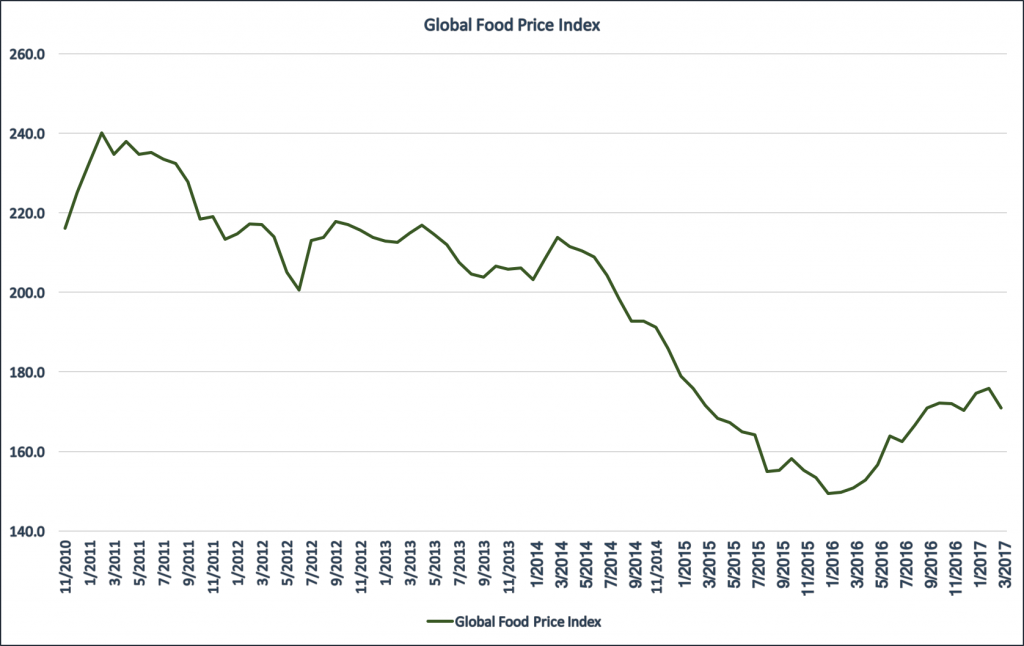 I was brought up in the school that believes the wheat market is really the true long-term trendsetter for grain prices as it is realistically a universal grain that can be produced just about anywhere and is used to feed both man and beast.  Do note that the extreme (record high) in wheat was actually posted back in 2008, when a number of commodities recorded highs, and after a classic Elliot wave A,B,C correction into 2008, has really been the downside leader for the grain/soy markets ever since.  One could argue if this means it has been a leader or a lager but I would suggest that until we have seen this markets’ fortunes begin to improve, we will not witness a sustained advance, particularly for the corn market.  All that said, I believe that finally over the past six months, the wheat market is providing signs that this massive ship is beginning to change direction. 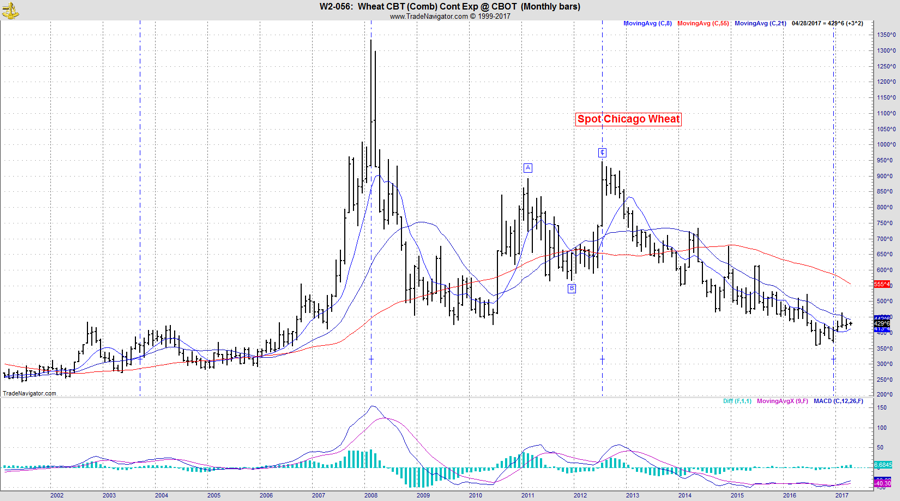 It is interesting to note that the FAO and the USDA are not seeing eye-to-eye at this time concerning global wheat production as the most recent estimates by Uncle Sam continue to project larger numbers.  Be that as it may, even if they are correct with the ever-expanding demand, the USDA projects that the ending stocks to usage ratio will dip lower for the first time in the past four years, which is the first step needed before expecting to see a price recovery and again, this is under the assumption that there will be nothing out of the ordinary with production this year.

While there is nothing within this information that screams that we should be loading up on the long side of the wheat or other grain/soy markets just yet but I do believe these are additional building blocks that are creating the foundation from which these markets will rally.  All we need now is the stimulus.