You may not have recognized it, but we are living through an epochal moment. From this time forward, analyzing and trading the supply side of the grain markets will never be the same. We only imagined that the High-Frequency Club of traders had changed the landscape but this latest group of market wizards have obviously been able to harness the power of uber-sophisticated computers and never before developed algorithms that have enabled them to not only accurately foretell the size of a crop before it is harvested but can actually do it before it has been completely planted.   While the alchemists of the ancient world failed to transform lead into gold, these modern-day sorcerers have succeeded with something even greater; the ability to determine global food supplies even before they have been grown. Of course, this is all nonsense but possibly not much more so than believing you can bank a crop that is not even quite 70% planted, which is the way the fund industry is approaching beans at this time.  I certainly would not argue that with the increased acreage and ample global supplies that beans do not face a decent headwind but at this early date, we should not lose sight of the fact that a couple of bushel hiccup in the national yield and the supply/demand balance shifts fairly significantly. As the great 20th-century philosopher Yogi Berra once said, “It ain’t over till it’s over.”

Grain and soy markets and particularly corn have snapped back nicely this morning, primarily in response to the weekly progress reports.  Beans planting remains just a smidge behind last year at 67% complete and beans emerged at 37% was both behind last year at 42% and the 5-year average of 40%.  The more supportive number though were in corn, where we find planting completion (at least for the first time) at 91%, which was 2% behind both last year and the 5-year average and emergence at 73%, also 2% behind.  The first condition report of the year though was the more closely watched, which for corn reports that 65% of the crop was in good to excellent condition.  While at first blush that does not sound all that bad, the fact that we began the year below 70% raises concerns.  Last year at this date we stood at 72% and not to be overlooked is the fact that the poor to very poor category is at 7% versus last year at 4%.  The three states leading this category are Indiana at 17% poor/very poor, Illinois at 15% and Ohio at 12%.  We should have an interesting summer ahead.

It would seem there is not much additional news for traditional agriculture floating around this morning, but I did come across an interesting article over the weekend concerning one of farming big growth areas; fish farming.  According to the UN FAO, at the current and evidently accelerating pace, consumer of farmed fish is on track to overtake wild catch consumption by 2019, two years ahead of previous forecasts.  Of course, this topic opens the door for any number of bad puns such as, “something smells fishy about this report” but there is no question that farmed fish production has been expanding at a rate of between 4 and 5% per year as more and more of the global population increases consumption.  Do you think Cargill spent over $1.5 billion two years ago to purchase the Norwegian fish food manufacturer just so the executives could cruise the Fjords?  I am sure that for many of you, the first thought that comes to mind is that fish farming is far too risky as there would be no way to hedge but that is actually not correct. 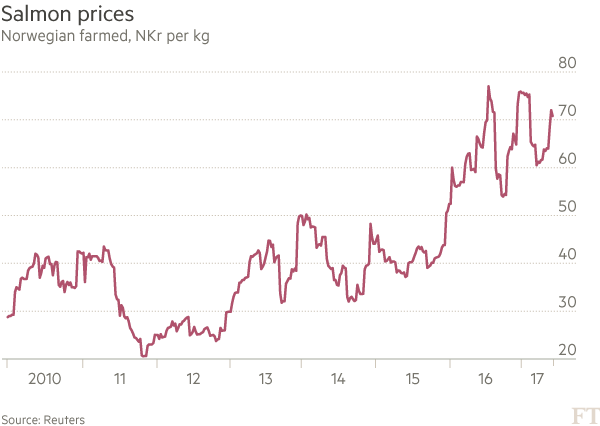 Nasdaq offers a Salmon Index that is based on the weekly reported sales of HOG (head on gutted) salmon and back in 2007 the Norwegian Fish Pool Exchange introduced a futures contract for fresh salmon.  So, if you happen to be “fishing” around to diversify into a new opportunity want to try and “net” additional profits, this could be the market for you.  Beware though, I understand that when everything does not go well, it can become a pretty “smelly” endeavor.