El Ni-NO.  That would appear now be the official statement from the National Oceanic and Atmospheric Administration, of course more commonly referred to as NOAA.  Back in March, they had raised the probability for an El Nino to develop this year to 53% but with the latest release have dropped that number down to just 36% and boosted the probability of neutral water temperature conditions to 53%.  Realistically, either way this probably would not have had any impact of the growing conditions in the middle of this nation but that is not to say the impact would not have been felt elsewhere.  With the limited understanding that I have, an El Nino can tend to spur wet conditions along the pacific coast, and needless to say, California and other coastal states have witnessed drought breaking rains over the past year. Potentially more important for markets though, there does appear to be a correlation with droughts in Southern Asia and Australia so along those lines, the potential for a problem in those regions later this year could be reduced.  All that said, the absence of an El Nino does not assure ideal weather for any region, it just reduces one potential risk factor.  We still have more than enough questionable regions in this country, as well as Europe to keep markets on their toes for the time being and neither bear nor bull should be feeling too comfortable just yet. 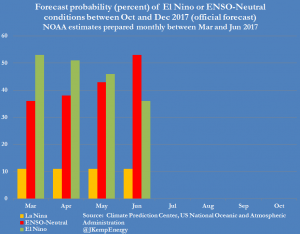 There used to be ad on television that exclaimed, “Wednesday, it is Prince Spaghetti Day” but for we in the grain trade we can say, Thursday, it is export sales day.  While the occasion may not leave us feeling quite as physically full, it is additional and needed nutrition for the market and can at times, leave us with a case of indigestion.  This morning we find that for the week ending June 8th we sold 600,700 MT or 23.65 million bushels of corn.  This figure was a nice boost from last week, being up 72% and was even 25% ahead of the 4-week average.  The top sales were made to Mexico, taking 200.4k MT, followed by Columbia with 109.7k, followed by China (China?) with 60.8k.  Bean sales were not outstanding but when you are already well above target, any new sales a positive.  Total sales were 340,200 MT or 12.5 million bushels.  Top in the list was the Netherlands purchasing 85k MT, followed by China with 61.5k and then Bangladesh at 61k.  Note as well that we sold nearly just a many beans for the next crop year as well, 314k MT.  For wheat, we are just embarking on a new marketing year and for the week we sold 373,400 MT or 13.72 million bushels.  The top purchasers were Mexico with 121.4k MT, followed by Nigeria at 56.6k and Taiwan with 53.9k.

After an overnight swoon, grain and soy markets appear to have stabilized and rebounded but we still search for that piece of new that could shake us from the doldrums.