The fledgling rally in the corn and bean markets that is barely a week old would appear to be experiencing the first test of confidence.  We know that the wheat markets have already been successful at testing the “bull” litmus test but of course, this is the commodity that has experienced a serious weather challenge not only in the United States, but in Europe and even Australia this year.  I see little change in the weather forecasts that have been issued this morning with temperatures rising in the regions of concern in the western corn belt and plains states, with calls for increased chances of moisture over the weekend.  I drove from Northern Illinois to St. Louis yesterday and while a windshield observation did not produce anything alarming, it was interesting to see the wide variably in maturities as corn that was planted early has tasseled, while that which was planted after the rains subsided appears to be at least a week to 10 days away from tasseling.  Beans appear generally and consistently short.  I look forward to traveling across Missouri later today and then up and across Iowa into the weekend.

As I commented initially, the action overnight would appear to be the first test of confidence for this rally and in the case of December corn, it is worth noting that after pressing down to test Monday’s gap (3.93 ¾ to 3.94 ¼) in the overnight hours, prices have bounced away from that level nicely. It would be premature to break out the noise makers and party hats, but that action is at least mildly encouraging.  If we can now be successful at pushing through and closing above 4.06, we should have something the bulls can again feed on. 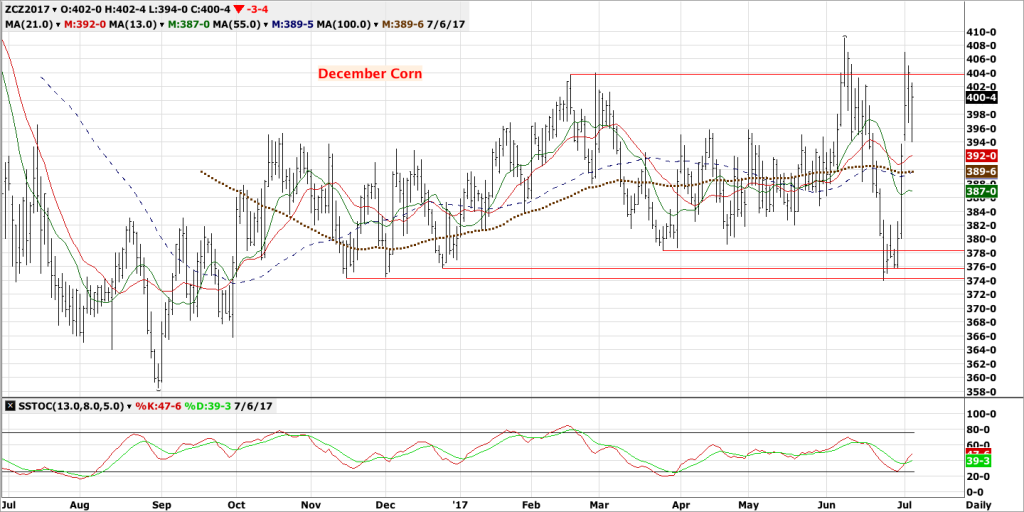 Because of the Independence Day break, export sales will be postponed until tomorrow, and then next week we will have delivered the USDA July production and supply/demand reports.  It is difficult to think the USDA will change projected yield estimates but we should see adjustments for the current crop year carryout from the grain stocks number as well as the phenomenal pace of bean exports.  Trade estimates should be floating around later today and tomorrow.

Needless to say, weather conditions will remain the key ingredient for the market action in the foreseeable future. That said, marcos should not be ignored, which this morning, appear to lean to the supportive side for grain/soy trade.  Equities and financials are lower, energies and metals are higher and the U.S. Dollar is under pressure.