“It is true the trade deal, the Phase 1 trade deal, the export boom from that trade deal will take longer because of the Chinese virus” – Larry Kudlow.  While by no means unexpected, when President Trump’s top economic advisor uttered those words yesterday, it was enough to dash some of the fragile rallies that began from the lows posted this Monday, but certainly not all of it.  Prices have snapped back again overnight.  Now that it would appear that more patients are being released from Chinese hospitals than admitted and the government has stepped up efforts to contain the virus, the world, and world markets appear a bit more at ease.  Still, as Mr. Kudlow confirmed, as with any illness, there will be lingering effects.

Evidently, Ukraine has few reservations about the demand coming from China.  The president of the Ukraine Grain Association commented yesterday that they had not seen demand from China wane and stated he was more concerned about losing business to competitors, most specifically the United States. It should be noted as well that this morning, the Chinese National Grain Trade Center said that they intend to sell 2.96 MMT of corn from state reserves to ease the feed shortage being experienced in some areas.  From here, this would appear to be closing the barn doors (I guess opening in this case) after the horses have gone, but such a move should, if anything, could help increase demand if they intend to replenish stocks.

Last week when the news and panic concerning the outbreak, if the coronavirus was still in a crescendo, I read a thought-provoking piece by economist Mohamed El-Erian, in which he pondered if this could finally be the event that broke market psychology.  By that, I do not mean broke the bull psychology in equity markets per se, but instead broke the mentality of “buy the dip.”  Without question, this has been the approach that many have taken for the past decade, and to date, have been rewarded handsomely by doing so.  As a contrarian, the concern is or at least should be, if everyone just KNOWS that is what to do, then you better watch out.  As the old saying goes, when everyone is thinking the same way, no one is thinking.  Mr. El-Erin went on to point out that there are a number of underlying structural factors that have been weakening globally, with the coronavirus just one of them, and due to the low or negative interest rate situation, central banks would have very few tools available at their disposal to help if things begin to sputter.  While I, for one, believe his words of caution should be paid attention to, obviously, they have fallen in deaf ears over in the equity arena.  This morning the S&P 500 is back flirting with record highs once again. 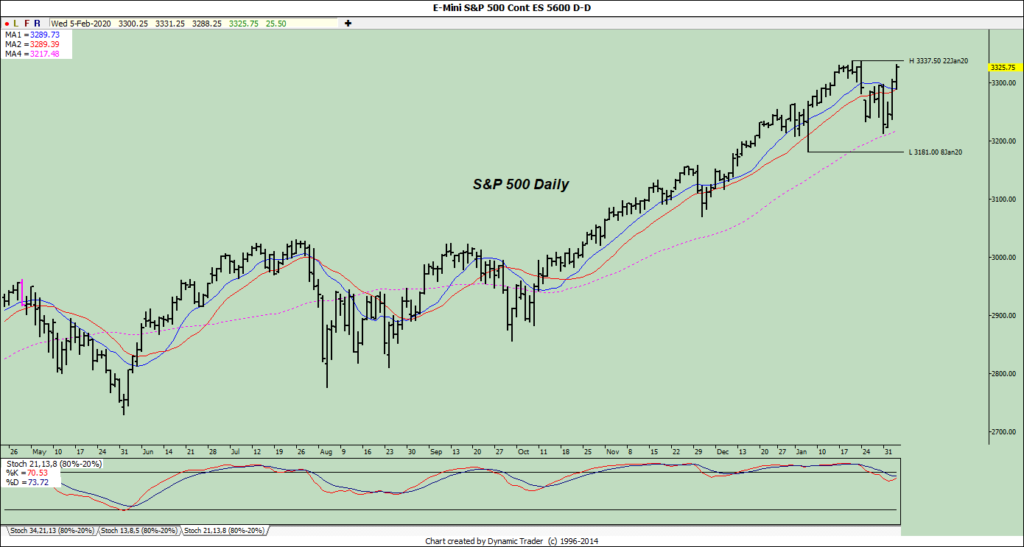