I should really consider taking a break from writing about markets on Wednesday as, more often than not, there is little news of significance to pass along.  Of course, the moment I would try that, the story of the century, or some such event would unfold, so I best keep at it.  There is always a fallback, and to paraphrase the classic line from the movie Casablanca, “We’ll always have weather,” particularly when it comes to commodity markets.  Temperatures are expected to return to above normal as we move out to next week, with the western side of the grain regions and particularly the Northern Plains turning wetter than normal.  Nothing else has gone well for that region this year, so why should we expect that to change now.

China is on holiday this week, potentially explaining their absence from the export scene, but there have been a couple of stories concerning trade.  The USDA attaché’ there now predicts feed demand in the country will grow 2% in 2021/22, led by expansion in the poultry sector.  That said, demand from the ethanol sector is struggling, with plants running at around 31% capacity, down from 40% a year ago.  Accordingly, the attaché projects total corn imports of 20 MMT, compared with the “official” USDA estimate of 26.  With the current $50 MT discount, they will undoubtedly favor Ukraine corn over U.S. corn.

The Russian Ag Ministry has now reduced its grain export forecast to 45-48 MMT for this year.  The previous estimate stood at 51 MMT.

Of course, we have weekly export sales to be released tomorrow morning, but it does not promise to hold much in the way of excitement.

In the macro world, we find equities under pressure, energies and metals both trading lower, financial instruments mixed, and after a couple of days of back and fill pressure, the dollar is charging higher once again.  We have yet to push through last week’s highs in the dollar, but bulls appear to have the momentum on their side.

December wheat remains in a minor downward retracement mode, thus far, reaching the 24% mark.  If we are to rebound again, I would not expect this correction to last much more than another day and at the extreme, could dip down to the 38% retracement at 7.34.  The next cycle counts line up between the 12th/14th. 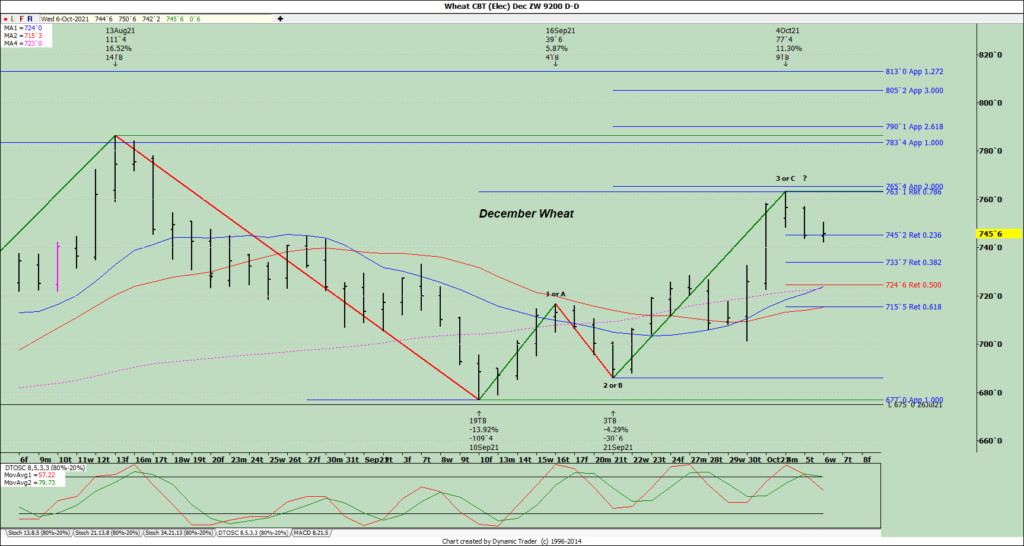 KC December futures has retraced a bit more than Chicago, already coming to within 4-cents of reaching the 38% retracement at 7.34 ½.  Prices appear to have stabilized overnight but short-term oscillators continue to point lower so there is room yet to see this contract reach that 7.34 mark and could even take a stab down to 7.25.  Ideally, this minor swing lower should be wrapped up within the next day or two.  The next cycle counts line up for the 12th/14th. 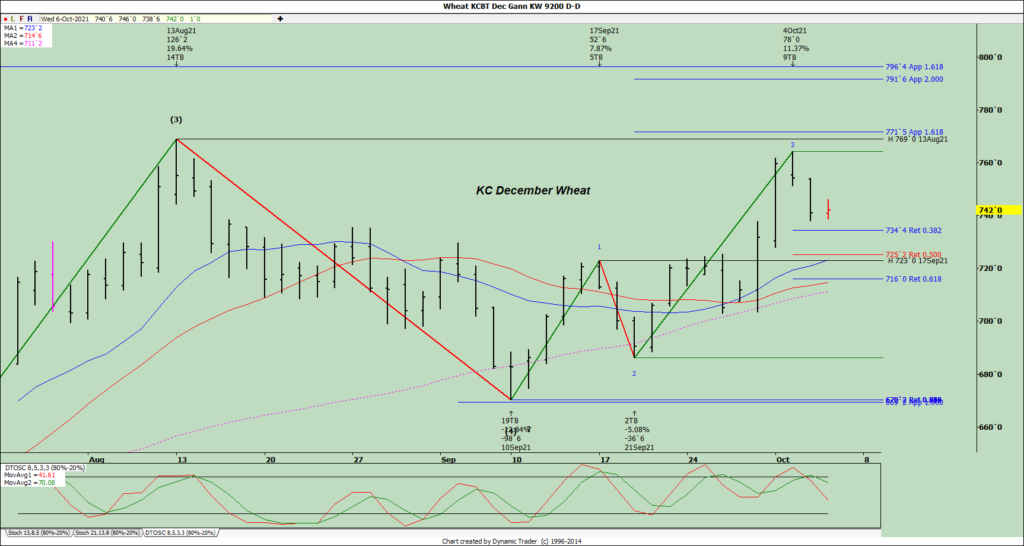 December corn appears to be in no hurry to move outside the current 7.45/7.35 trading range.  Needless to say, we will not remain within these parameters indefinitely, but for now, lack an incentive to exit to either side.  Daily stochastics have turned flat just below the overbought zone but thus far have not crossed lower.  I suspect that should occur within the next day or so, and if correct, this market should remain in a defensive posture through the end of the month.  Cycle counts ahead between the 12th /14th, the 22nd/25th, and then the 5th of November.   That final date will mark the completion of the 5th cycle of 90-calendar days from the August 2020 bottom. 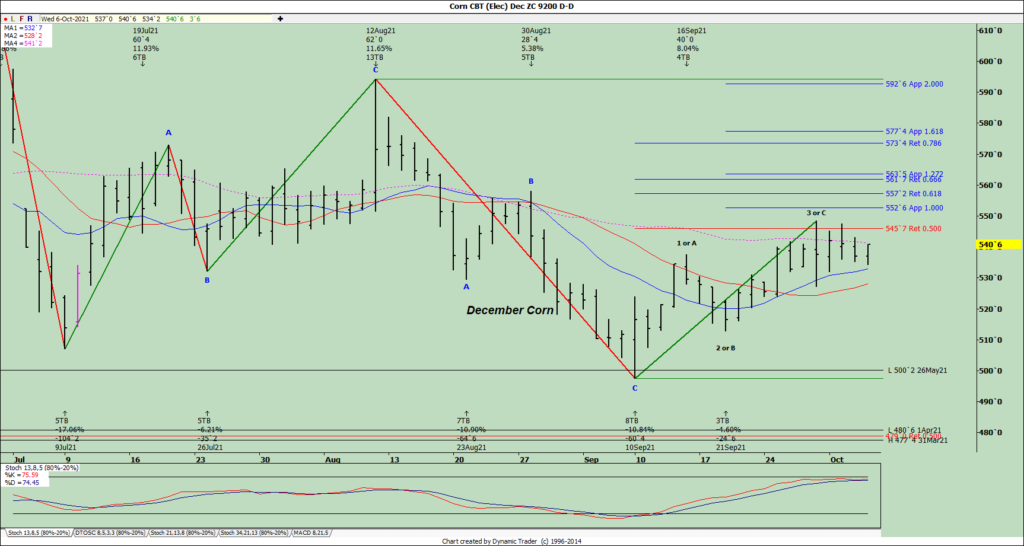 After being roughed up by the bears for more than a week, bean bulls had finally had enough and fought back yesterday.  The net result for November futures was an outside higher reversal, and just importantly, it denied the bears as second closed below the 12.40 mark.  While it remains uncertain if they have the muster to climb back above the 12.60 level and try to confirm a bottom, but with stochastics beginning to turn upward, the possibility exists.  Even if that mission is accomplished, overhead resistance will be thick.  Cycle counts ahead sit on the 8th, the 20th, and the 1st of November. 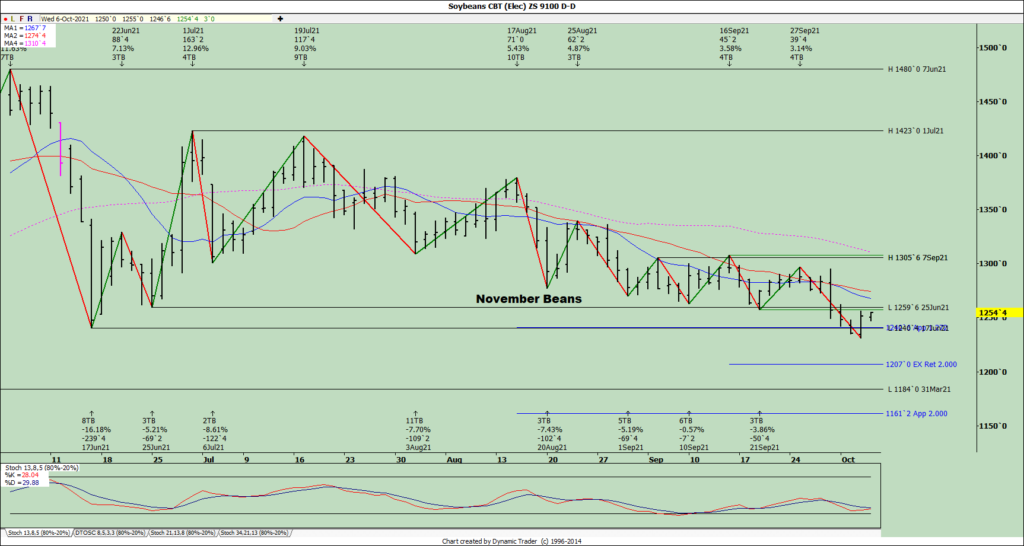 December bean oil shot right past the 50% retracement at 60.26 yesterday, reaching the 62% retracement at 61.69 in the process.  Bulls do not appear to be satisfied quite yet as they are trying to extend the advance again overnight.  Daily stochastics are just moving into the overbought zone, and I would expect this advance to be exhausted by the weekend.  The next cycle counts sit on the 11th and the 20th. 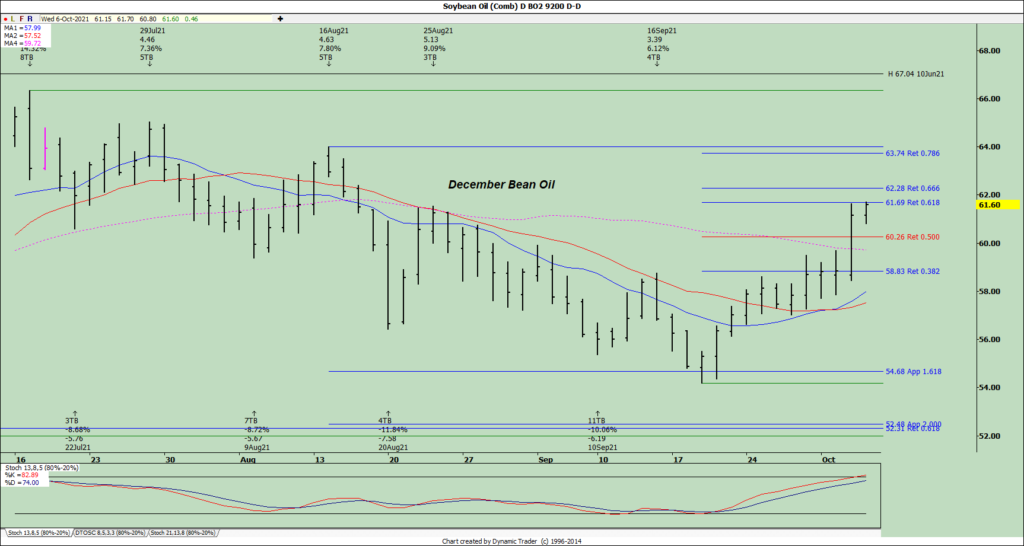 After four lower closes in a row and a test of the 320 level, December meal has finally uncovered a little buying overnight.  Note that the previous down leg in August/September lasted 16-session with a loss of 31.80 or 8.7%.  The current leg is now 16-sessions old, but the loss is a bit shallower at 27.20 or 7.8%. By no means do that have to be precisely equal and with indicators turning flat in the oversold zone, we need to be on the lookout for signs of a bottom.  The next cycle counts sit on the 12th, the 22nd and the 3rd. 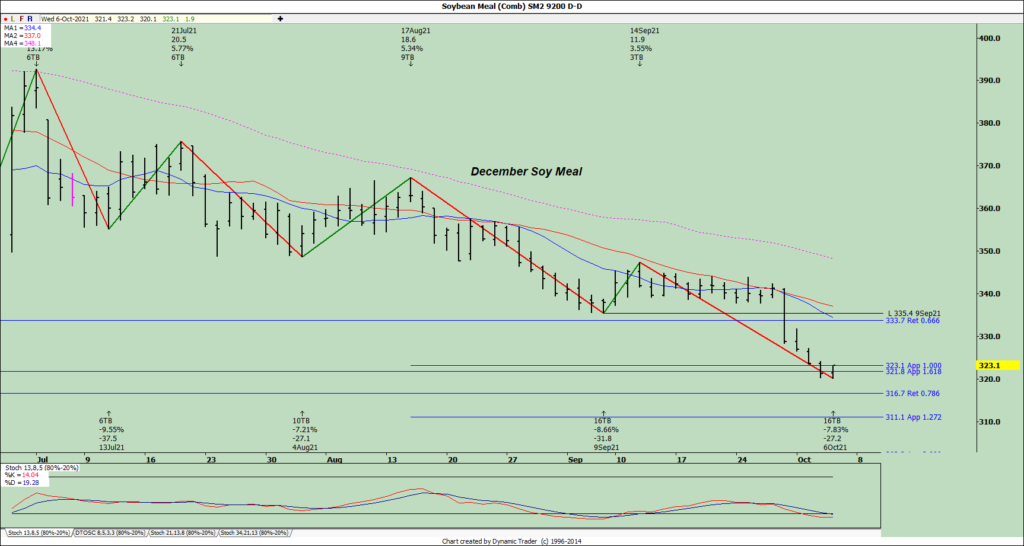 Up, up, and away for the cotton market as December futures gapped into higher highs overnight and have yet to look back.  These are all the classic signs of a blow-off run to a peak, but exactly how high that will be is yet to be determined.  We are now within striking distance of the major 62% retracement at 116.34 and of course, there is nothing to say we can stop there.  Cycle counts ahead sit on the 14th, and the 26th. 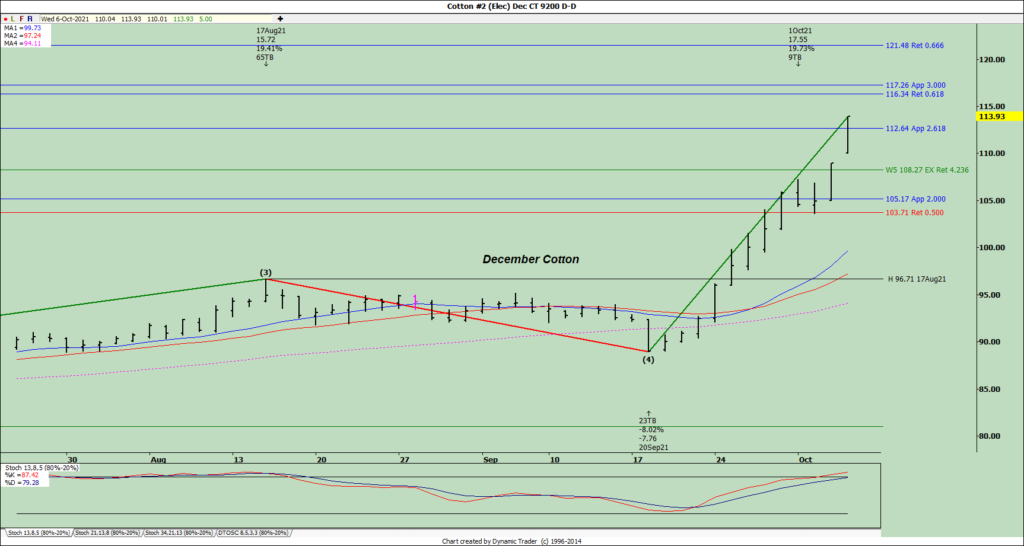 After two days of pressure, December hogs have been bent a little bit but not quite broken.  Daily indicators have turned sideways but not yet lower, so if prices can rebound for the close today, there remains potential for a second rebound.  Look for support below at the 80.20 level.  The next cycle counts fall on the 15th and the 26th. 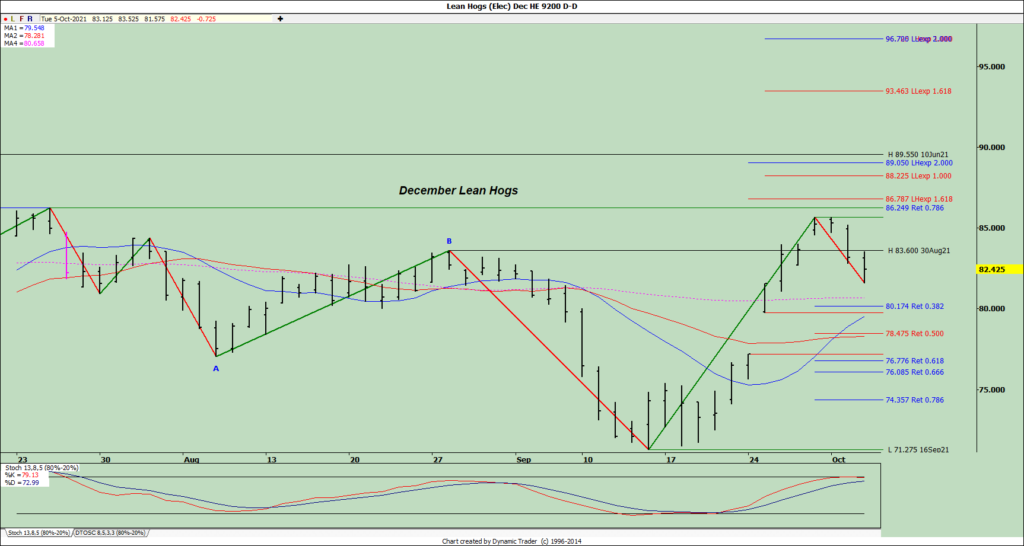 December cattle tried to extend the Monday advance yesterday but could not sustain strength into the close.  Be that as it may, short-term oscillators are pointed higher and we should have room to at least carry this contract back against resistance between 129.50 and 130.50 before we run out of gas. 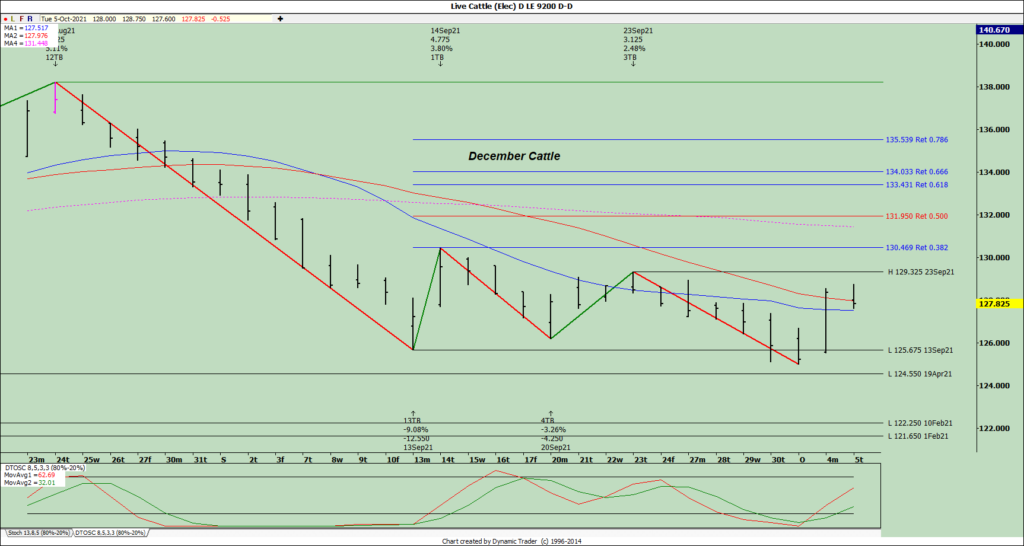